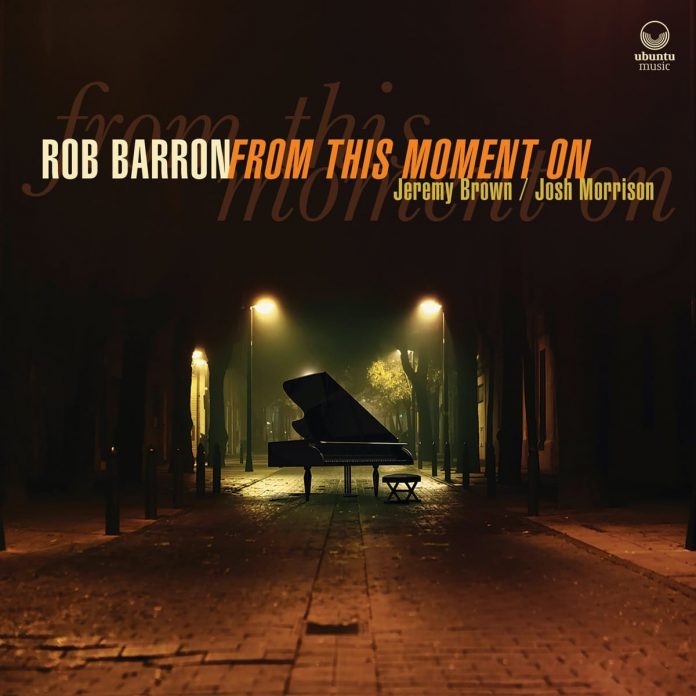 Rob Barron is a mainstay of the London jazz and studio scene, a first-call pianist highly regarded for his improvisational flair, innate musicality, and deft touch. Concerning his latest project, he explains “From This Moment On struck me as the perfect name for this album. As well as being the title of the Cole Porter song featured on the record, I felt the optimistic narrative of the lyrics is a positive and hopeful sentiment during this period of crisis in the world. It brings a sense of looking forward to a brighter future….

“This album was born in a small practice room at Steinway Hall, London. It was January 2017 and I had gone there to sketch out my own arrangement of Anthony Newley’s ballad, Pure Imagination. Instinctively I felt that a medium tempo groove would suit the fresh take that I wanted … I knew I had started the journey of this album on that cold distant day.”

That fresh take is extended to eight American Songbook classics and two originals – Fortune Green and Evidently. Lover Man kicks off at a surprisingly fast lick, a long way from the Billie Holiday lassitude usually associated with this song, while My Foolish Heart is also sped up, losing some of its familiar regret, although Barron’s solo discovers some new paths to explore. In A Sentimental Mood, too, suffers somewhat from its faster tempo, losing its essential reverie.

In contrast, Butch And Butch benefits massively from its speed, allowing Barron to attack the melody with considerable verve, while the slow slouch and fine touch of As Time Goes By is just perfect. A Time For Love ends the set in suitably languorous fashion.

Of the two originals, Fortune Green has all the hallmarks of a classic songbook number, an intriguing harmonic shift distinguishing its stylish melody, while the rhythm undertakes an occasional Latin shift as a change of emphasis. Evidently is a fast and furious hard bop piece, a blowing number crying out for a trumpeter to punch out a fine solo.

To be honest, I would have preferred more Barron originals, and a little less of the fresh-take, too-fast assault on the songbook. But then Barron brings interest to everything he plays, and Brown and Morrison are more than up to the task, which makes for a satisfyingly strong album.

Simon Adams - 31 October 2019
Not for the first time with an ECM album, some help might be needed to identify the various instruments. The leader’s nyckelharpa is a traditional Swedish keyed fiddle with...