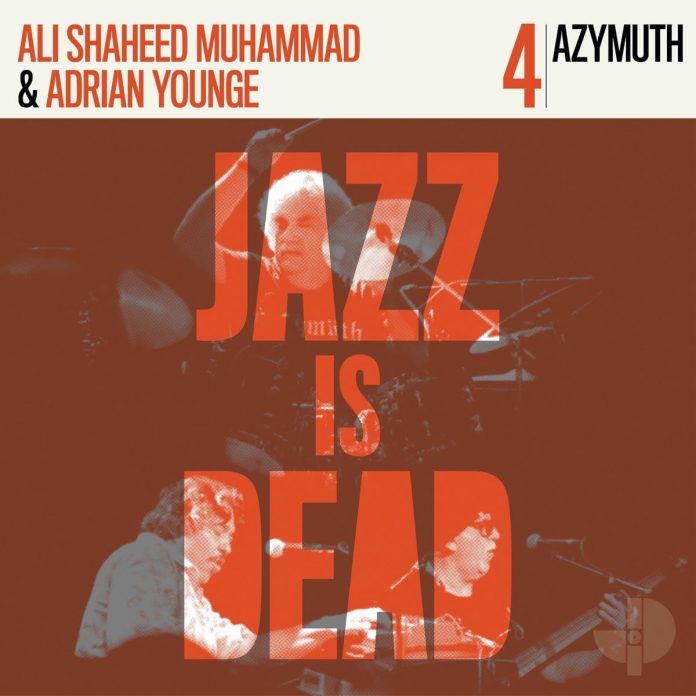 The instrumental trio Azymuth modernised the sound and style of Brazilian Jazz with their electronic instruments, angular arrangements and ingenious synthesis of jazz, funk, rock and samba. The band members have changed over the years and the current lineup consists of Alex Malheiros on bass, Ivan Conti on drums and Kiko Continentino on synthesizer.

They are not household names in the UK but did have a hit single in the British charts in 1979 with Jazz Carnival. They have always been based in Brazil but they tour Europe regularly. In 2016 they released the album Fenix, showing that the group was still very much active despite being in their fifth decade of pushing the boundaries of Brazilian music. Their music is particularly popular with other recording artists and DJs for the purposes of remixing and sampling.

This new Azymuth album is the fourth release from the splendid Jazz Is Dead series by producers and musicians Adrian Younge and Ali Shaheed Muhammad. The concept for Jazz Is Dead started in 2017 when Younge and Muhammed set up a jazz concert series featuring jazz veterans like Doug Carn, Roy Ayers, Gary Bartz and Azymuth. In an interview with Rolling Stone, Muhammed explained the thinking behind the concept: “We want them to feel the love for what they have given us in a time where a spotlight may not be shining brightly on their works.”

But don’t run away with the idea that this is some sort of “love-in” or a charity hand-out. Nothing could be further from the truth. Whilst Younge and Muhammad’s interest in these veteran jazz artists will introduce them to a younger and different audience, the albums stack up for themselves. JiD003 featuring Marcus Valle was given a five-star review in October and the same this month with JiD005 (featuring Doug Carn).

Younge and Muhammad have a great skill in venerating the artist but adding something new in order to give the music more relevance to a new audience. Azymuth emerge from this recording refreshed and reskilled but with their musical legacy firmly intact. The album has not been over produced, which as is always the risk with younger producers more comfortable in the digital world than the band they are producing. Azymuth specialise in a sound they call “crazy samba” (Samba Doido) and that is a perfect way to sum their music up.

The musicianship from Malheiros, Conti and Continentinho is faultless but so too are the additional instruments played by Younge and Muhammed. Both are talented musicians in their own right but their real talent lies in writing, arranging and producing. If you like your jazz-funk laced with lashings of salsa, you really do not want to miss this. I am just hoping that the JiD series will get into double figures.

Peter Gamble - 04 December 2020
There is an awful howler on the front cover of this Retrospective compilation indicating that these two CDs contain Morton’s “51 finest 1923-1953”, an impossible claim, since he died...