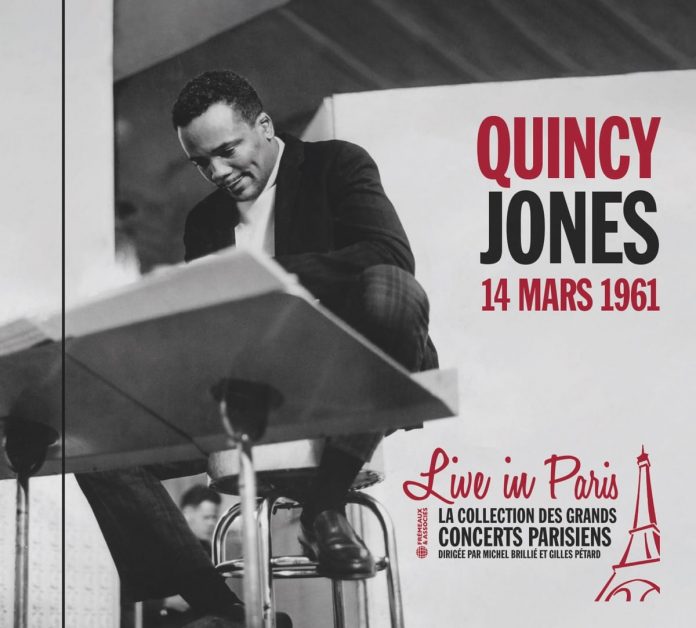 Frémeaux’s excellent series of concert performances in Paris includes a double CD by Quincy’s band of 1960. This one by Quincy in 1961 has been available in France for some years.

The album has the banner (en français) “For The Defence Of Sound Heritage” on a sticky label. The disc’s only failing is the erratic balancing of the instruments. You’ll tire of prominent but accomplished drumming from Martin, whilst Fuller’s pyrotechnics are in the middle distance and the excellent trumpets out in les environs: the sax section sometimes murmurs politely in the background.

The liner note doesn’t comment on the album – you wouldn’t know whether the writer had heard it – and I can understand why for, faced with such relentlessly good trumpets, I’d hesitate to identify all the soloists. Q mentions “six-year-old Freddie Hubbard” and Eric Dixon before the fine chart of Nelson’s Stolen Moments, and there’s some wonderful lead trumpet work throughout.

Melba Liston has an eloquent Solitude to herself whilst the reliable Phil Woods’s big fat sound triumphs in Q’s great arrangement of Bess and I suspect that must be Benny Bailey setting the theatre on fire in Moanin’. Woods returns eloquently for 10 minutes of his own Banja Luka.

The sections are appropriately distant on Caravan, but yet again Quincy’s arrangement is inspired and masterful. The French horn is the waif of the orchestra, but Watkins is its finest practitioner and he’s dynamic and powerful here. The lovely Midnight Sun features Phil again (his tracks are piling up) and it is as good as ever.

Quincy and his all-star band suffered great privations in 1960 when the show Free And Easy collapsed, leaving them all stranded. But Quincy was back in Paris the next year with this replenished band, keeping old hands like Woods, Johnson, Liston, Spann, Watkins, Bown (this new album find two new ways of misspelling her name) and Catlett. So it wasn’t really a new band, but Q brought in outstanding players like Hubbard to fill the holes left by the likes of Clark Terry and Jimmy Cleveland.

The CDs show that the revamped band used many of the earlier charts. Valdes comes into his own on the 12-minute Africana where he subsides to let some great writing for brass and an unambitious trombone soloist (can that be Persson?) come to the fore. The tenor soloist who follows, probably Budd, is similarly unadventurous so maybe it was on instructions from the boss. The drums replace Zoot in Birth Of A Band.