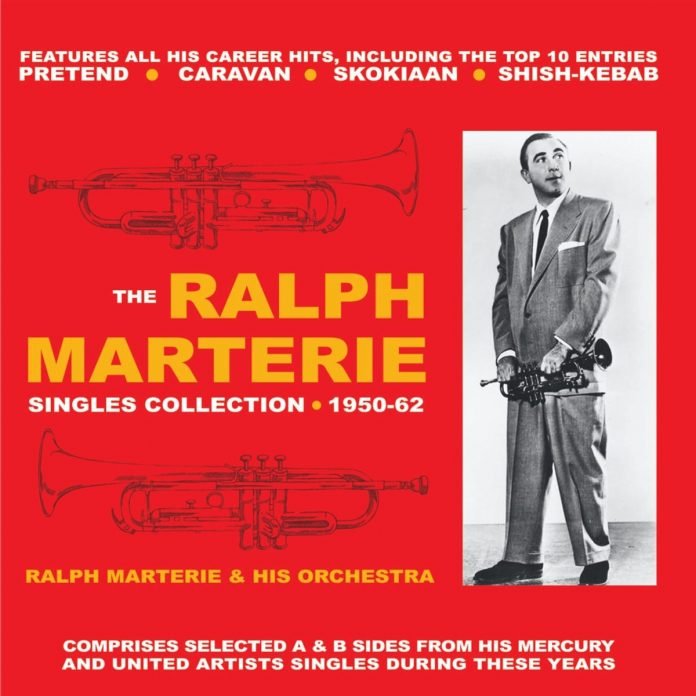 Ralph Marterie was one of the last big band leaders to experience popular success despite the impact of rock ’n’ roll in the 1950s. Born as Ralph Martire in Italy in 1914 he moved with his family to Chicago when he was a child where he took up the trumpet when he was 14. He played professionally in his teens in theatre orchestras and led a US Navy band during the second world war. Afterwards he worked as a band leader for ABC Radio featuring himself on trumpet which led to a contract in 1949 with Mercury Records.

Marterie’s output for Mercury and later United Artists to which he moved in 1961 is remarkable considering the market for big band music was progressively shrinking throughout his career. He recorded over 60 singles including swing standards, novelties, Latin jazz and lush pop ballads that often spotlighted his trademark sound of trumpet twinned with guitar.

He cheerfully embraced rock ’n’ roll as the 50s progressed and his willingness to tailor his music to what the mainstream mass market enjoyed brought him a chain of hits such as Skokiaan, Pretend, Caravan and his cover of Bill Haley’s Crazy Man Crazy.

This 55-track double CD set provides an engaging and representative sample of Marterie’s eclectic output. It comprises selected A & B sides from the singles he made for Mercury between 1950 and 1960 plus three that he released on the United Artists label in 1961/62. The set features all his chart entries and admirably showcases the virtuoso technique of this largely unsung trumpeter and bandleader. The content is high-quality orchestral pop, especially when the recordings enter the stereo age in the late 50s.

They say variety is the spice of life and in this respect Ralph Marterie’s music excels. He was still on the road with his orchestra in 1978 when he died suddenly at the age of 63. The collection comes with a booklet containing interesting notes about each of the recordings.

At Keith Tippett’s invitation, Matthew Bourne first paired up with him in 2016, the duo performing live for the first time at the London...

Dave Gelly irritates me a great deal. It's because, so often when I read him, he makes me say "I wish I'd written that." When...

With the passing of Dr. Lonnie Smith on 28 September 2021 at his home in Fort Lauderdale, FL, the jazz world bade farewell to...

The essential thing is not to panic. What you do is find a nice quiet corner - there is one somewhere in the building,...