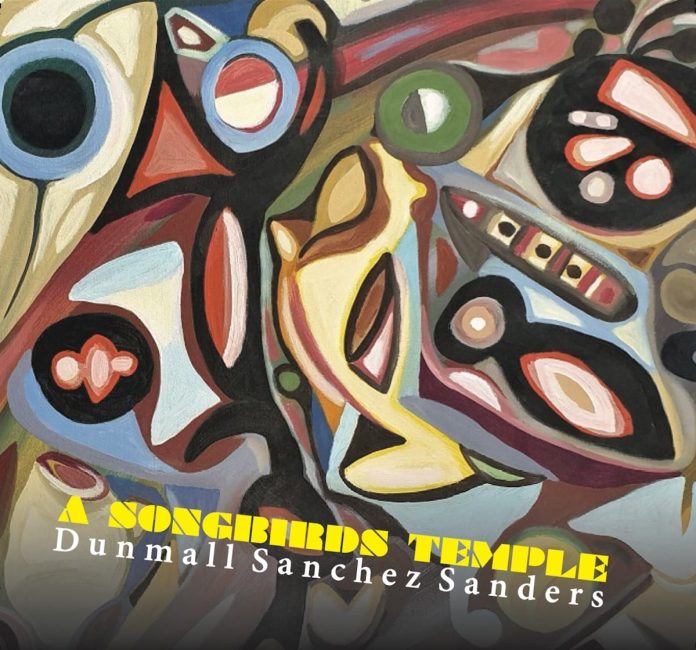 Dunmall and Sanders have worked and recorded together many times over the years, but as far as I’m aware they have not played, or at least recorded, with Sanchez. She brings plenty of valuable baggage to the trio, though, having worked with such heavyweights as Wadada Leo Smith, Rob Mazurek and Tony Malaby, and she fits right in here.

The 16-minute title track opens with a musing feel, the three instruments discussing terms, before the piece develops through a series of episodes of varying complexity and intensity, finding space for several reflective passages and permutating duo episodes.

Ever Renewed Horizons, another long and varied piece, opens with muted, introspective piano against soft gong sounds before Dunmall enters to establish a melancholy conversation that gradually becomes more agitated, each player contributing gyrating figures building to a fierce peak that evokes late-period Coltrane, parting briefly for a cascading solo by Sanchez.

Many Kinds of Tigers is a progressively dense improvisation with a centreless feel that ultimately consolidates with a hard-hitting contribution from Sanchez, leading to a sense of reconciliation sealed by a subtle drum coda. Just Past Jupiter, with Sanchez engaging Dunmall in a congenial dialogue, has a lighter emotional tone, if not quite Holst’s Bringer of Jollity.

The final track (a relatively brief four minutes) finds Dunmall on flute and rounds off this satisfying album on a quiet, crepuscular note.

Ian Lomax - 27 January 2019
Ricky Peterson has quite a CV: longstanding keyboard player for David Sanborn, staff producer at Prince’s Paisley Park (where he produced the bestselling "The Most Beautiful Girl in the...