The Mark Harvey Group: A Rite For All Souls 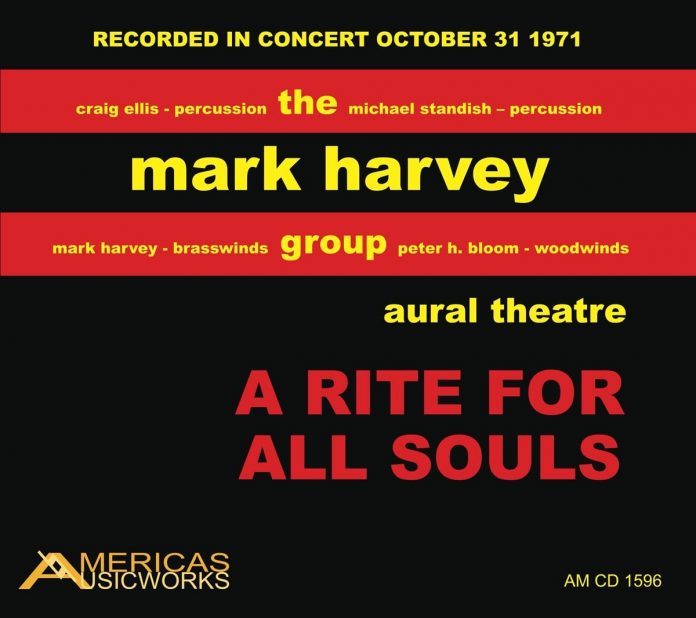 This Rite was a concert with theatrical elements performed by Harvey’s quartet a couple of years before he founded the Aardvark Orchestra. It was recorded on reel-to-reel tape, as was the norm in those pre-digital days of course, but the recording was never publicly heard and was lost until 2018. Now here it is in digitally remastered form.

If certain slight sound imbalances remain at some points, these are actually positive characteristics, adding to the atmosphere and giving a sense of the spatial aspects of the performance. The sound quality is more than merely acceptable.

Beginning with the musicians processing onto the stage in hooded habits, the evening was devised to mourn and protest at the deaths during the Vietnam War (then still raging with 15 months to go before the Paris Peace Accord) and the threat to lives posed by poverty, discrimination and inequality. It remains all too relevant today.

Interspersed with the music there are recitations of four poems: Gary Snyder’s Spell Against Demons, Jack Spicer’s Orpheus, Ellis’s Napalm: Rice Paper and W.B Yeats’s ever-pertinent The Second Coming. Yeats wrote “The blood-dimmed tide is loosed, and everywhere / The ceremony of innocence is drowned. / The best lack all conviction, while the worst / Are full of passionate intensity” but sometimes the best get passionately intense too, and in this ritual there is plenty to demonstrate that.

The music ebbs and flows, from solo passages that seem to ponder solutions, via dialogues that suggest examinations of the issues, to free ensembles that describe the threats, all of which are emotionally affecting, but what will matter most to most listeners is that it all works well as music.

In the discography below I have given the details shown on the cover, but things were much more complicated. The quartet employs an extraordinary range of sounds which intensified my emotional response to the music. Some instruments I could readily identify by ear, for others I relied on guesswork based on the unallocated list given in the booklet, but I am indebted to Ann Braithwaite of Braithwaite & Katz for a more detailed run-down of who did what when.

The band used toys and found objects as well as “exotic” instruments such as the suona (a Chinese equivalent to the oboe), mbira (African “thumb-piano”) and bamboo fipple (end-blown) flutes but some hard-to-place sounds were created by unusual use of common instruments (e.g. sax without a mouthpiece, flute without the head-piece, organ pipes played as percussion). At some points Ellis plays instruments other than percussion e.g., piano during the reading of The Second Coming and Napalm and flutes elsewhere. Harvey’s brasswinds include trumpet, flugelhorn and French horn, Bloom’s woodwinds various saxes and flutes.

Sadly, Ellis and Standish did not live to see this release (they died in 2006 and 2014 respectively) but it serves as a fine memorial to them and a tribute to the talents, concerns and commitments of all four musicians.

For information about A Rite for All Souls and to buy CDs: http://www.americasmusicworks.com/mark-harvey-group.html For streaming on Spotify, iTunes, Amazon, AppleMusic and other platforms, go here: https://themarkharveygroup.hearnow.com/

In a break from his series of tributes to the Kinks in the form of two well respected albums, The Ray Davies Songbook (Jazz...

Pianist, composer and educator Junior Mance died in his New York City home on 18 January. He was 92, and had been in failing...

Just occasionally a jazz solo becomes so well known that it transcends boundaries and becomes absorbed into the mainstream of popular music. Bobby Hackett...

When I wrote about the Istanbul Jazz Festival recently, I commented that following Mozart, jazz had appropriated Turkish music – in the form of...

Having had the original version of "Strange Fruit" in my possession for almost 20 years, I find it difficult not to be prejudiced against...