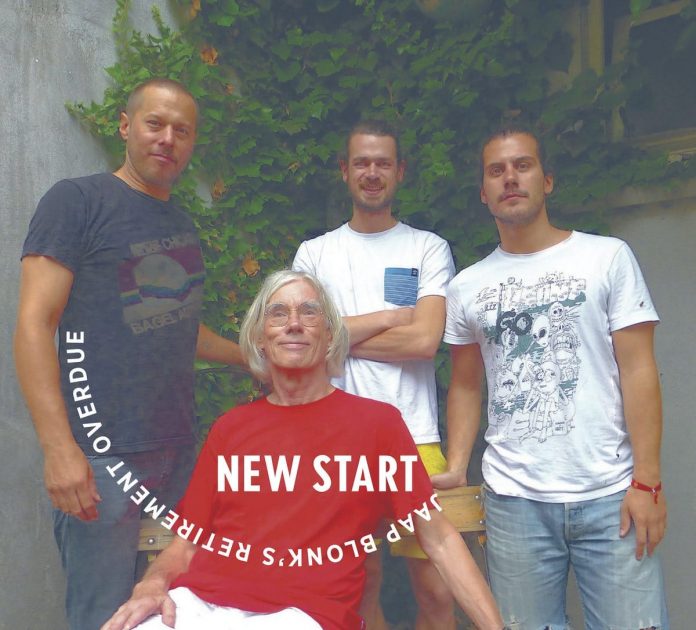 “When I was about to turn sixty-five, I thought: why not start a new band, and give it a name that asks for consistent challenge: Jaap Blonk’s Retirement Overdue … And since it is twenty years ago that I last had a regular band that played mostly my pieces, this is a New Start”. Thus the leader.

With Blonk on voice and electronics, his band features three younger luminaries of the Amsterdam improvised music scene: Frank Rosaly, Jasper Stadhouders and Miguel Petruccelli. Rosaly was a mainstay of the Chicago scene; the Uruguayan Miguel Petruccelli has been based in Amsterdam for several years. Both Petruccelli and Stadhouders play electric guitar as well as bass guitar.

All compositions are by Blonk, often collectively improvised with the group, except for Leonard Bernstein’s Somewhere, and Rápido Y Leve by Jasper Stadhouders, which has text by Blonk. The result is a characteristically exuberant and entertaining set of performances, and I’m reminded of the memorable Blonk gig I heard in 2016, at York Medical Society Rooms, which included a performance of Kurt Schwitters’ Ursonate.

Blonk was born in 1953 in Woerden, Netherlands, and took up saxophone in the late 1970s. It was a few years before he discovered his true metier as a vocal performer – reciting poetry, and eventually creating new sounds through vocal improvisation. From the mid-90s, Blonk began working with electronics, using samples of his own voice, and eventually pure sound synthesis.

These recordings give some indication of Blonk’s stage presence and improvisational freedom. The band has a rough energy that’s been called “Dada-punk”, and the results are a bit scrappy – but that’s the ethos. The very fractured No Go Area is an excellent example, with its fine guitar solo, I presume by Stadhouders. The words – I’m not sure you’d call them lyrics – are very witty. This is characteristic and rewarding work by an Old Dutch master.

“Nightports is based on a simple but unbreakable rule of restriction: only sounds produced by the featured musician can be used. Nothing else. These...

Many of those who take jazz history seriously will have read Ira Gitler’s words. In books, magazines and liner notes he brought to wide...

Paul's professional career was interrupted by a stint in the US Army around the end of the 60s. "They sent me to Berlin, and so...

"The words – I'm not sure you'd call them lyrics – are very witty. This is characteristic and rewarding work by an Old Dutch master"Andy HamiltonJaap Blonk's Retirement Overdue: New Start
Advertisement