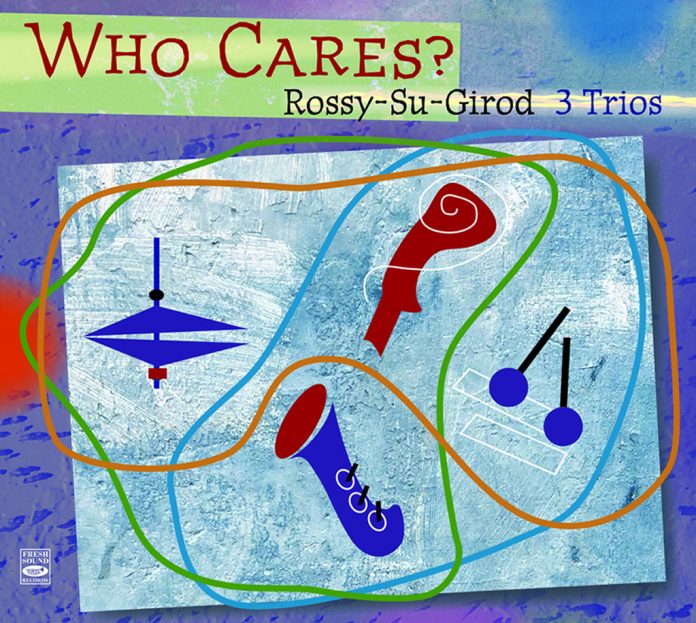 Rossy’s impressive CV includes work with Paquito D’Rivera, Brad Mehldau, Mark Turner and Kenny Wheeler. Born in Barcelona in 1964, at times domiciled in Boston and New York but back in his home city since 2000, Rossy has long been known as both a drummer and pianist of quality and distinction. Fellow JJ critic Nigel Jarrett recently assessed his remarkable multi-instrumentalism in his review of Rossy’s recent Vibes Quintet release Beyond Sunday with, a.o., Mark Turner (ts) and Al Foster (d).

The operative idea of the present 3 Trios is that Rossy plays, from piece to piece, either vibes or drums, with the former choice seeing altoist Su shift to the tubs.

One track, a liquid eight-minute treatment of Clare Fisher’s lovely Pensativa, eschews drums to feature vibes, sax and bass and I wish there had been more of this particular trio in the mix. While Rossy’s drumming is crisply variegated and diversely cross-rhythmic (hear him cook on The Song Is You or I Concentrate On You) when Su sets his alto aside, he offers a far more stripped down or functional rhythmic foundation (sample That Old Feeling). This contrast tends – for me, at least – to diminish the appeal of the album as a whole. Which is a shame, as there is otherwise plenty to enjoy in music lit up, at its best, by a smile-inducing mix of airy yet purposeful swing, flowing melody and harmonic juice.

As an altoist, Su has much to offer: hear him burn on the aforementioned Song and float out on Every Time We Say Goodbye, following the telling introductory pizzicato figures from Girod – a fine bassist whose rounded sound and snapping bounce can bring Paul Chambers to mind.

As for Rossy: while he’s no Milt Jackson, Bobby Hutcherson or Walt Dickerson, he impresses as much on the vibes as he does on the drums, his astutely weighted command of melody, rhythm and harmonic texture a delight throughout.