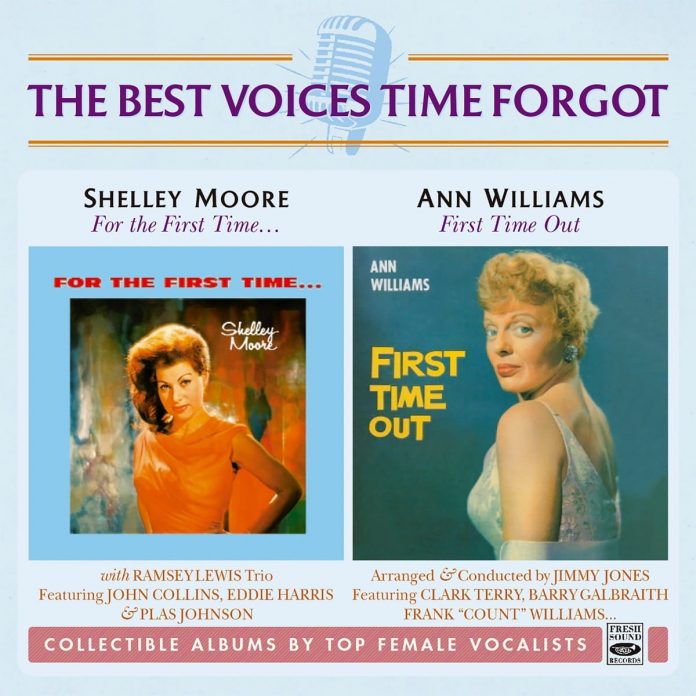 Both singers presented here are on the boundary between jazz and pop. The one perhaps closest to jazz will have older UK fans digging into their memories of the Vic Lewis orchestra. This is Shelley Moore (c.1932-2016), who sang with Lewis in the 1950s, going with him to America on a tour that took his version of Stan Kenton’s music back to where it came from.

Moore remained in America, singing for a while with Ray McKinley, then settling there at the end of the decade. Almost at once, she made For The First Time, but in 1963 bowed out in order to raise a family. She made a comeback in the late 1970s, singing mainly in Southern California’s clubland and recording again in the early 1990s.

Moore’s voice is soft and gentle with good diction and phrasing whether on ballads, such as For The First Time and Twilight, or uptempo numbers like I Want To Be Happy. Here and there is a subtle Latin touch, for example on I Hadn’t Anyone Till You. A light and carefree atmosphere is evident throughout the session and there are good solo spots from pianist, flautist and tenor saxophonist.

After studying classical piano, Ann Williams (1928-2007) began singing professionally soon after her 1949 marriage. For a decade she sang in clubs, often in New York City, and in 1960 made First Time Out. Apart from a few singles, this album appears to be her only recording. In later life, Williams lived in Southern California and was active there on the local jazz scene, although not as a performer.

Her vocal sound is clear and she brings to the lyrics awareness and understanding of the emotional content. The accompaniment has three different groups all led by Jimmy Jones, who also wrote the arrangements. Recorded at three sessions during the same week (tracks not appearing chronologically), the bands are small groups, on one date expanded with a four-piece string section. The instrumentalists, like Williams, perform with engaging crispness although solos are few. As the series title tells us, time has forgotten these two singers and this is an attractive reminder of their talent.

It seems odd to tie jazz to a building, and surely the works of no other musician could produce four full CDs of classic...

Tell us about your family, musical, educational background - birthdate, place. Is music in the family? How did you come to sing? Do play...

Here are some of the very best items that the Quintet of the Hot Club ever recorded. The accent is very much on swing,...

"Both singers presented here are on the boundary between jazz and pop ... As the series title tells us, time has forgotten them and this is an attractive reminder of their talent"Bruce CrowtherShelley Moore: For The First Time .../Ann Williams: First Time Out
Advertisement