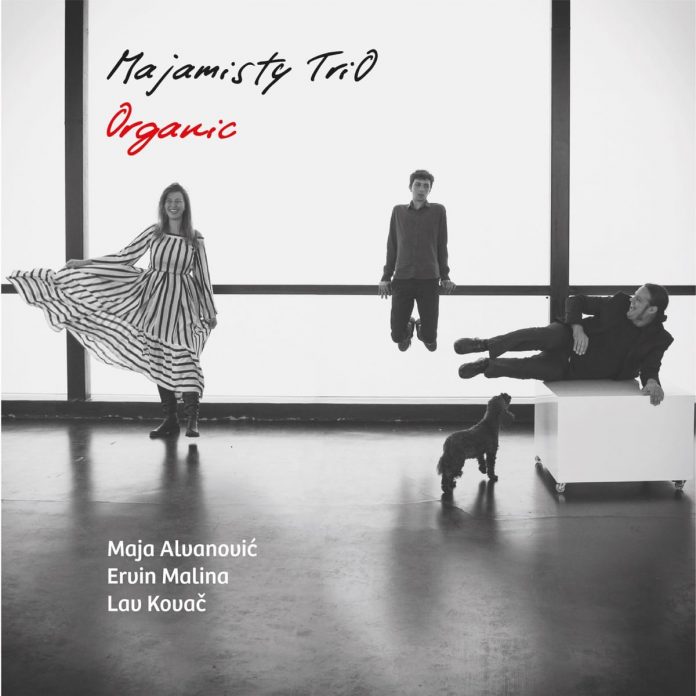 The Majamisty Trio from Novi Sad in Serbia have now released three albums, the first two of which were Mistyland in 2011 and Love in 2014. However, I am ashamed to admit I had never heard of this piano-led trio before this fine new release arrived via download. My loss, for this trio is sublime.

Pianist Maja Alvanović, composer of most of their songs, has a classical poise to her playing, but, also, as on the opener, Heritage, a sense of occasion, and anticipation. Never rushed, she quietly lays out the main themes and their variations as if she had all the time in the world.

Alongside her, bassist Ervin Malina is tuneful and independent, often walking his own path, his arco a resonant delight, while drummer Lav Kovač, a new member of the trio, is quietly insistent. But this is a group that plays as one, an organic whole, as the title of this new CD suggests.

Of the eight tracks, one that stands out is They Couldn’t Stop Travelling, a gently rolling piece with an initial sense of melancholy that opens out into something far more experimental. In contrast, Jungle is a roller-coaster of changing tempos, all clattering drums and evocative riffs, that ends in cinematic style. Absence is a ballad of quiet longing, Minuet For a Dog a surprisingly complex and enthralling dance, Because Of Rain an insistent, rain-splattered ending.

Just when you think that the world has enough piano trios to be getting on with, a new one comes along to stand proudly in the front row. Its members should be mighty pleased with this fine album.

Sarah made her first recording when she joined Billy Eckstine’s band in September 1944. It was of Tadd Dameron’s chart of "I’ll Wait and...

It has always seemed that jazz has had far more than its share of musicians who died young. Leon "Chu" Berry died at 31, joining...

Simon Adams A Good Year: For the Love Supreme Festival in Sussex, at which the unexpected highlight this past year was a Spanish-enthused Chick Corea...

Often proclaimed a major new figure, Pat Metheny shows himself on this outing to be, if anything, a gentle giant of jazz - which...

"Just when you think that the world has enough piano trios to be getting on with, a new one comes along to stand proudly in the front row. Its members should be mighty pleased with this fine album"Simon AdamsMajamisty Trio: Organic
Advertisement