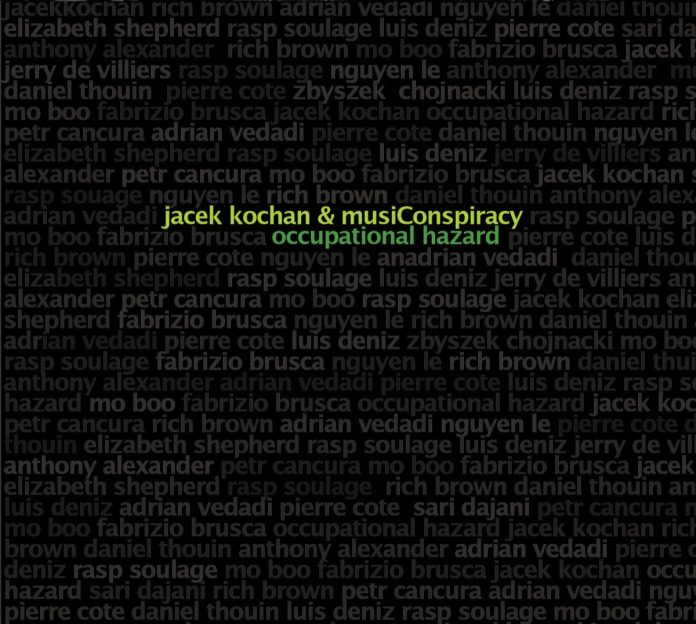 Having been a professional drummer since the 70s, Jacek Kochan has worked with a number other jazz musicians through his career such as Oliver Jones, John Abercrombie and Dave Liebman, and is now releasing his 22nd studio album. Titled Occupational Hazard, it reflects the variety of his substantial career, incorporating a range of styles. However, jazz is at its core.

The album is very experimental, juxtaposing fusion, avant-garde and traditional jazz. The first track, Fear No More, blends Kochan’s rhythmic improvisation over a repeated vocal line from Elizabeth Shepherd, before a series of solos from bass and saxophones, culminating with complex fusion-guitar improvisation by Jerry De Villiers Jr.

Evident Monk revolves around a similarly angular melody, with a dissonant harmony provided by gritty overdriven guitar and organ, before they fade away to allow room for a spacious alto sax solo from Luis Deniz. The title track intensifies the experimental atmosphere, as Kochan and Sari Dajani join Shepherd on sporadic vocals that weave around a fast, intricate composition led by Anthony Alexander on piano and organ.

The range of musicians on the album means that each track has a slightly different feel from the next, adding to the musical variety of the album. For example, with five guitarists, each solo takes a different shape, varying in technique and contour. From the more trad-jazz approach of Half Baked and Mocker’s Lounge, to the almost prog-rock Better Yet, Kochan’s album is full of interesting ideas that, while often distinct, are combined successfully to make a captivating and thought-provoking album.

While this release will suit the avant-garde enthusiast more than anything, its contemporary nature and combination of genres makes it accessible to any fan of modern jazz.

François van de Linde - 12 January 2020
Whenever anyone expresses the idea, and with good reason, that Woody Shaw was "the last great innovator on trumpet", it is usually followed by the afterthought that recognition of...