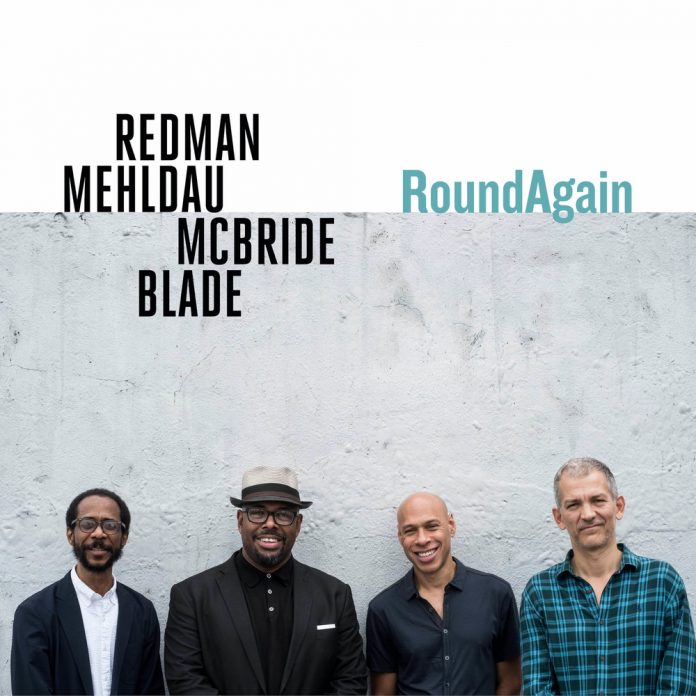 The monumental ensemble featuring Joshua Redman, Brad Mehldau, Christian McBride and Brian Blade have touched base once again almost 30 years after they recorded Moodswing as the Joshua Redman Quartet.

As a bandleader for the first time, spanning almost a year and a half back in 1994, Redman knew this band were soon to dissolve: “I realised almost immediately that this band wouldn’t stay together for very long. They were without a doubt, for our generation, among the most accomplished and innovative on their respective instruments. They were already all in such high demand – everyone wanted to play with them! And they all had such strong and charismatic musical personalities – destined to start soon pursuing their own independent visions. I knew better than anyone else just how incredibly lucky I was to have even that short time with them.”

Redman spoke about how they had all played with one another at various moments in their careers but had never reunited: “I knew it would happen, but I didn’t know when, we were all so busy, and we needed the space, both in our schedules and in our creative development.”

Blade added further “This band is like a turntable where the stylus was lifted but the turntable is still spinning. We just had to drop the needle, and there we were with all of the information we had gathered. It has gotten deeper because of life itself, and because Joshua, Brad, and Christian plumb the depths every day.”

Mehldau has established himself as one of the most significant pianists of the last quarter-century, but also a composer who is never afraid to broaden his horizons. Christian McBride is a six-time Grammy winner and has been a notable spokesman as artistic director for the Newport Jazz Festival. He is also artistic chair of Jazz House Kids and host of Jazz Night In America. Blade, who co-leads the Brian Blade Fellowship, has made close connections with many musicians including Wayne Shorter, Joni Mitchell and Norah Jones.

RoundAgain begins with a Redman composition which features continuous circling phrases by Mehldau, fitting in with the saxophone where desired. Silly Little Love Song brings together the quartet with a familiar comping pattern and gives Redman a perfect platform to excel. Floppy Diss showcases the brilliant soprano ability of Redman, incorporating dense bebop lines with bluesy phrasing. Blade’s Your Part To Play is a beautifully shaped piece of art which begins mellow with plenty of space until reaching a climatic forte and finishing in similar nature to the introduction rounding off RoundAgain.

Previous articleStars Of Jazz: A Complete History Of The Innovative Television Series 1956-1958
Next articleLettuce: Resonate

The album title hints at something a bit left-field and that’s how things work out. Don Byron has built a reputation in the more...

Those fortunate enough to make a living from the “liberal” professions such as journalists, artists, actors and musicians are dependent upon many factors, one...

This book contains nine chapters written by nine different writers, all but one American and each with significant academic credentials. There’s a clear implication...

Brian Blade: “This band is like a turntable where the stylus was lifted but the turntable is still spinning. We just had to drop the needle, and there we were with all of the information we had gathered"Thomas FletcherRedman, Mehldau, McBride, Blade: RoundAgain
Advertisement