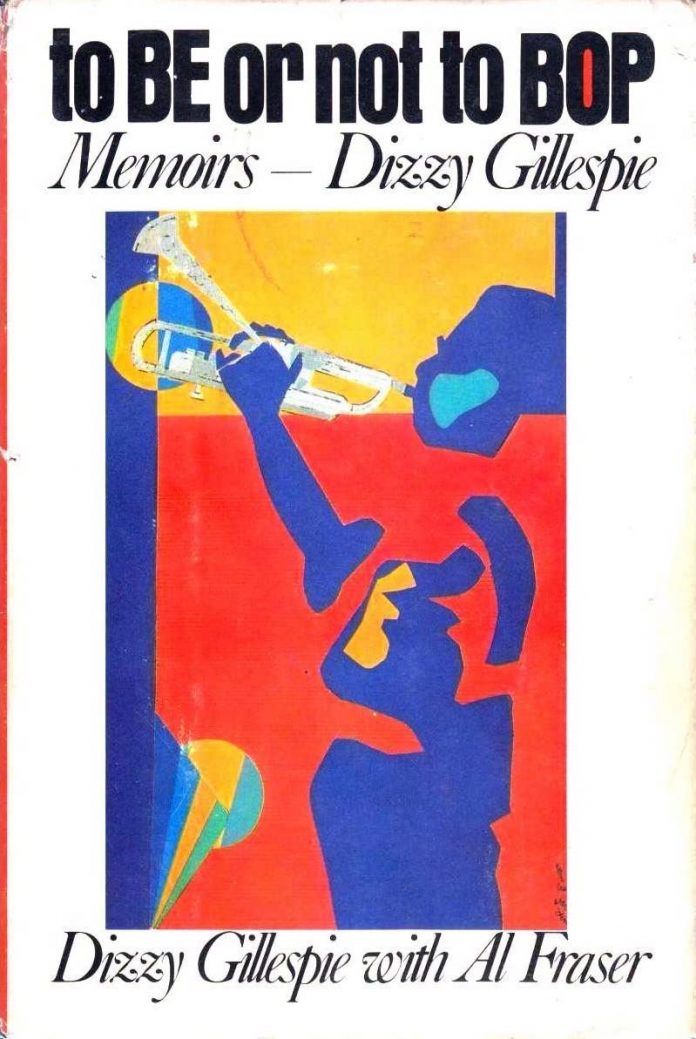 After reading this book anyone might be excused for dismissing Gillespie as a foul-mouthed megalomaniac much given to personal violence against adversaries. Band leaders have suffered in Gillespie’s hands; Edgar Hayes had his own glasses smashed into his face and Cab Calloway was stabbed with the knife which Dizzy always carried.

The book is largely a catalogue of Gillespie’s own importance to jazz over the years, the superiority of coloured musicians and the implication that it was Dizzy who influenced just about everybody since he first took up the trumpet.

There is not an ounce of compassion, humility or modesty to be found in these 550 pages but there are a number of statements which make me wonder what our Race Relations Board might think if the book was presented to them as a piece of inflammatory, racist “literature”. (“Even whitey has his uses” is perhaps the highest praise for non-coloureds you will find.)

Generally the book follows the narrative line commencing with Dizzy’s birth in Cheraw, South Carolina and finishing with the duet on “Salt Peanuts” with Jimmy Carter at the White House in 1978. It takes the form of Gillespie’s own story, boringly interlarded with four-letter words, plus statements from contemporaries such as Milt Hinton, Max Roach etc.

Unfortunately there is so much repetition (always to Dizzy’s advantage) that the book could have been half the length without losing any of its value. For example on pages 52 and 53 Gillespie tells us how he saved the life of trumpeter “Fats” Palmer then on page 55 we have “Fats” Palmer telling us how Dizzy saved his life. And so it goes on, self-aggrandisement from the author followed by back-slapping statements from friends. The “tell-it-like-it-happened” approach covers up some of the most slap-dash writing I have ever read, which may make casual readers assume that jazz is a form of music by and for illiterates.

All this is written more in sorrow than in anger for this could have been a good book covering the end of the swing era, the growth of bebop and the confused post­war years. Unfortunately Dizzy’s own aims have taken precedence, and all this from a man who had the temerity to criticise Ross Russell’s book on Charlie Parker for its bias and inaccuracy! In a book of this length I find it incredible that Howard McGhee, for example, is not mentioned at all.

Al Fraser (Associate Professor of Afro-American Studies at Cheyney State College in Pennsylvania) and Gillespie have produced one of the most disappointing jazz books since Mingus’s appalling “Beneath The Underdog”, which was another prime example of missed opportunity. There is a useful selective discography (which includes some hitherto unknown session information) and a film listing, plus over 100 historic photographs.
Alun Morgan

Previous articleJeff Cosgrove: History Gets Ahead Of The Story
Next articleJJ 06/80: Ran Blake & Jeanne Lee – The Newest Sound Around

Here's a piano trio with a welcome aptitude for moving beyond the obvious. Not for them the sterile trappings of abundant technique, although there's...

Cathi Hayes: It’s All Right With Me / Lu Ann Sims: At Separate Tables

Dave Pell, who died on 7 May 2017, was a man of many parts – multi-instrumentalist, bandleader, photographer and creative director of Mowest (Tamla-Motown’s...

Tirelessly researched and seemingly aimed at scholarly types and the academic end of the drumming community (though musos in general will find much of...