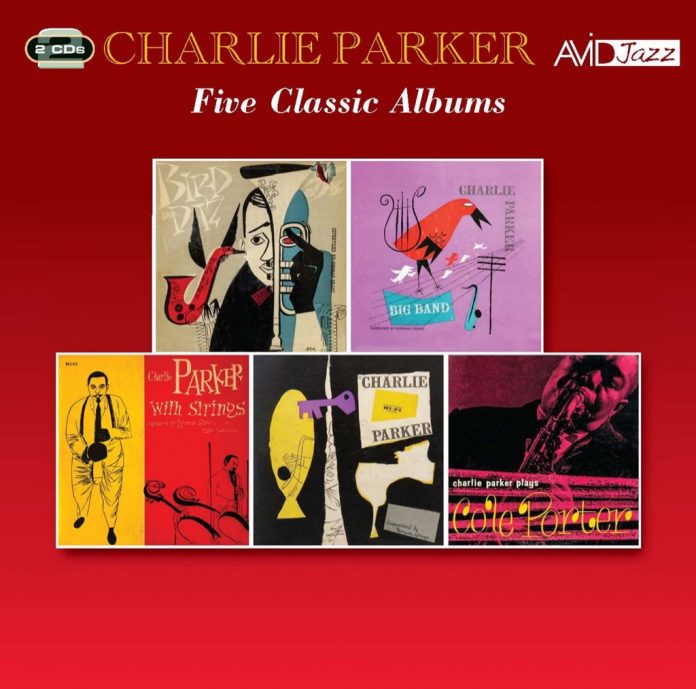 With jazz – lite and trite, near and drear, pretentious and tendentious – seemingly on the increase, the reissue of five “classic” Parker Verve albums (even in truncated form) is to be welcomed. Newcomers (if any exist) to his latter-day recordings as well as devotees (still alive) will find much to enjoy in this Avid compilation – which finally has liner notes visible to the naked or bespectacled eye.

Bird & Diz is the least satisfactory of the sessions, largely because of the clumsily unsympathetic and robotic drumming of Buddy Rich, but also because of the unoriginality of much of the material. Bloomdido and Mohawk, listed as Parker compositions, employ the chord patterns of I Got Rhythm, while Leap Frog uses the changes of Stompin’ At The Savoy. That said, Diz and Bird, in what was to be their last studio recording together, and the only time they recorded with Monk are well-suited. André Hodeir was one of the few critics who found much to admire in these performances, notably Bloomdido and An Oscar For Treadwell, where the principals displayed “a perfect musical coherence”. On the evidence presented, Norman Granz’s assertion that Monk was “a lesser light in modern jazz” and that Rich was “a very swinging drummer,” and together with Curly Russell formed “an ideal rhythm section” is a moot point.

Charlie Parker Big Band is altogether more rewarding, with 10 tracks (later increased to 24 – including alternate takes on a 1999 reissue) with Bird obviously enjoying the “swing” arrangements by Joe Lipman. He emotes brilliantly on Temptation, followed by a romantic string-accompanied version of Autumn In New York. Other highlights are a blistering Lover and a no-holds-barred Night And Day – the trombone soloist has to be Bill Harris. Reportedly, Bird told Lipman that he wanted a faster version of this number, and suggested an extra chorus by Oscar Peterson.

Charlie Parker With Strings, one of his favourite albums, received mixed reviews when it was first issued. Buddy Rich plays with more delicacy and restraint than on the Bird And Diz disc, while Parker is audibly inspired by the impressive string and horn sections to deliver some of his most moving performances. April In Paris amply demonstrates the point. Just Friends was to become one of Bird’s most famous performances, but I’ll Remember April runs it a close second.

Charlie Parker Quartet (originally entitled Now’s The Time), has Bird at his lyrical best – try the title track (with distinct shades of The Hucklebuck) and/or I Remember You. Al Haig or Hank Jones, Percy Heath and Teddy Kotick constitute ideal rhythmic support. A delight from start to finish, this is one of the best of Bird’s Verve recordings.

Charlie Parker Quintet Plays Cole Porter also deserves that accolade. Curiously, although it has the alternate takes of Kick Out Of You, Love For Sale, and I Love Paris, it doesn’t include Begin The Beguine, Night And Day, Thing Called Love or Still Of The Night, which were included on the Complete Verve Recordings and also a separate CD – with astute notes by Gary Giddins. It was recorded only three months before his death, and despite some hesitations and pitch problems it is quite remarkable. What comes through is his feeling for the material. Pianist Walter Bishop, guitarists Jerome Darr and Billy Bauer, bassist Teddy Kotick and drummers Roy Haynes and Art Taylor provide unobtrusive but sympathetic support. I Love Paris, is in Garry Giddins’ verdict “an ingenious juxtaposition of minor and major keys [which] gives this song its intriguing character”; Bird “hears the blues in Porter’s mournful cadences and mines them for all they’re worth”. The two alternate takes verify his assertion. Strongly recommended.

Nic Jones - 07 June 2019
Am I alone in thinking there’s been a positive critical consensus when it comes to assessing "new" sets of material from some of the major figures in the music?...