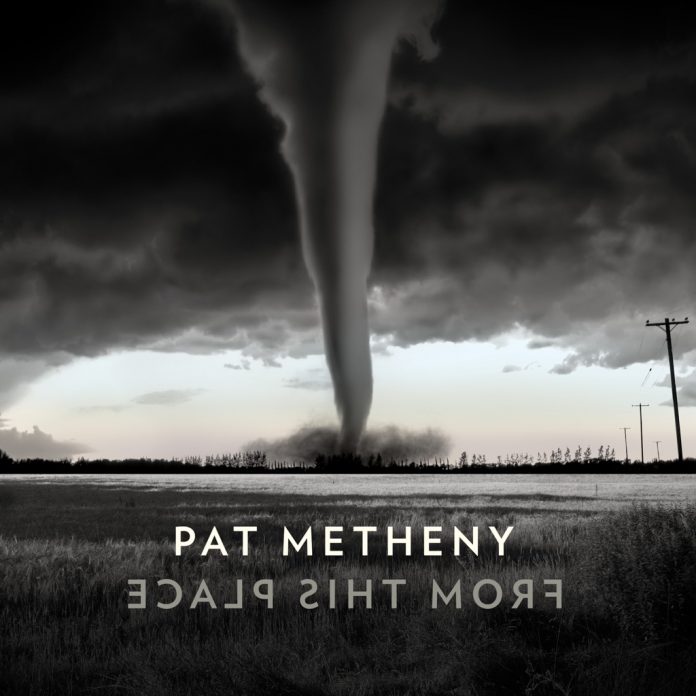 “From This Place is one of the records I’ve been waiting to make my whole life”, Pat Metheny says in a statement released by Nonesuch Records.

This spectacular project, featuring his regular musical companions in an orchestral setting with the Hollywood Studio Symphony, surely more than fulfils the guitarist’s ambitions. Co-produced with his former bassist Steve Rodby, From This Place is an absolute triumph, surpassing the quality of the ambitious 2003-4 work The Way Up (also on Nonesuch), a fine creation underpinned by synthesizers rather than a real orchestra.

Oddly though, the new album opens in a less-than-promising way, with the introductory lead line on America Undefined – played by bowed bass – lacking the boldness you would expect at this level. The fog quickly clears when Metheny’s guitar takes up the theme – and then the whole things begins to really take off with a stupendous piano solo from Gwilym Simcock and Antonio Sanchez’s drums providing a strong undercurrent. When the orchestra enters in force, there’s a beautifully spacious conclusion to the track, complemented by a variety of sounds including clanking railway-crossing bells, the strings of the Hollywood Studio Symphony dramatically surging towards the track’s dynamic conclusion.

Wide And Far offers an attractive Latin-feel contrast, led by Metheny’s guitar, while a hypnotic triple-time piano figure on You Are gradually ushers in a noble, surging theme underpinned by the strings and with voices subtly added as the swirling sounds become more powerful.

A gently rocking Latin feel sweeps Same River along, and the strings are sweeter here, and Simcock once again provides an attractive and spaciously voiced piano solo, before Metheny enters, this time on guitar synthesizer (or perhaps a synth effect on his archtop guitar). Pathmaker opens with a typical Metheny small-group feel – lead guitar over rhythm section, with the strings providing a subtle backdrop and punchy drumming from Antonio Sanchez – while the ballad Past In Us provides warm romanticism, with Gregoire Marat’s harmonica leading the theme. Everything Explained features a freewheeling solo by Metheny and a Cuban-tinged piano feature from Simcock, strongly underpinned by the rhythm section. The title track ballad, pleasantly sung by Meshell Ndegeocello, leads to the final movement of the work, Sixty Six, opening as a gentle Latin and gaining pace, with Metheny’s guitar and Sanchez’s drums powering the theme.

Although Sixty Six concludes the set, there follows what is described as a bonus track on the CD booklet, Love May Take A While, a flowing ballad which has the feel of an encore following a concert performance. Overall, a tremendous achievement by a guitarist and composer realising his dream.

Nic Jones - 09 November 2020
Of these two is Fresh Sound's The Best Voices Time Forgot series one (Guyse) has a background which has largely been hidden from history, while Sherrill, thanks in no...