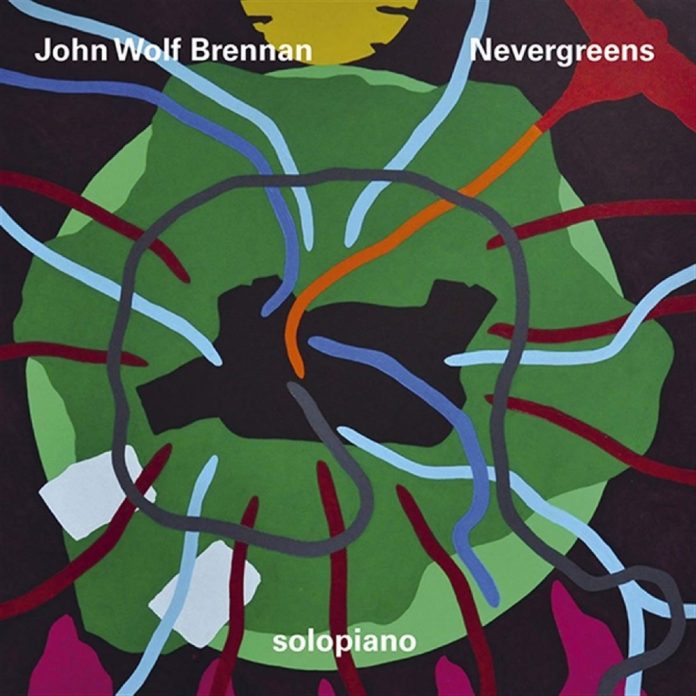 I once characterised the Wolf as a combination of Irish romanticism and Swiss clockmaker technique (that’s where he lives) and the description, which I feared he might find belittling, has stuck. It’s hard to get past it now. Brennan is a wonderfully detailed, exact kind of musician, to a level that would seem fussy in almost anyone else, but which is coupled with a sweeping vision that has to be accounted Celtic, even though his more immediate models are Germanic, or in the case of Para.Ph[r]ase, a variation on Steve Reich’s Violin Phase, American.

The tracks on Nevergreens are drawn from various phases of his career and derived from two trilogies, identified as blue and yellow, which include such remarkable recordings as The Beauty Of Fractals, Text, Context, Co-Text And Co-Co-Text and the Well-Prepared Clavier. This explains the numbers attached to the tracks which explains the numbers attached to the tracks, though one doesn’t need the provenance to enjoy the music.

A third trilogy is apparently in preparation, featuring cover versions of pop and classical material. As an Irishman, Brennan is never far from tears, laughter or dance and all three figure here, even when the dance figures are a seemingly awkward 7/8 or 9/8 as on Belles’n’Decibels. Some are awkward waltzes, inspired by a Disney character, or a sort-of rumba, played on prepared piano. Brennan also used arcopiano, where the soundbox is bowed, works inside and plays a bit of melodica on Lost In Violin and Homing.

If you haven’t caught up with Brennan’s solo work, this is an ideal place to begin.

Kevin Hays, Mark Turner & Marc Miralta: Where Are You

Ian Lomax - 23 October 2019
This bass-less trio have between them some impressive CVs. Kevin Hays is a Grammy-winning American jazz pianist and composer. He made his first recording as leader in 1990 and...

Screamin’ Jay Hawkins: At Home With