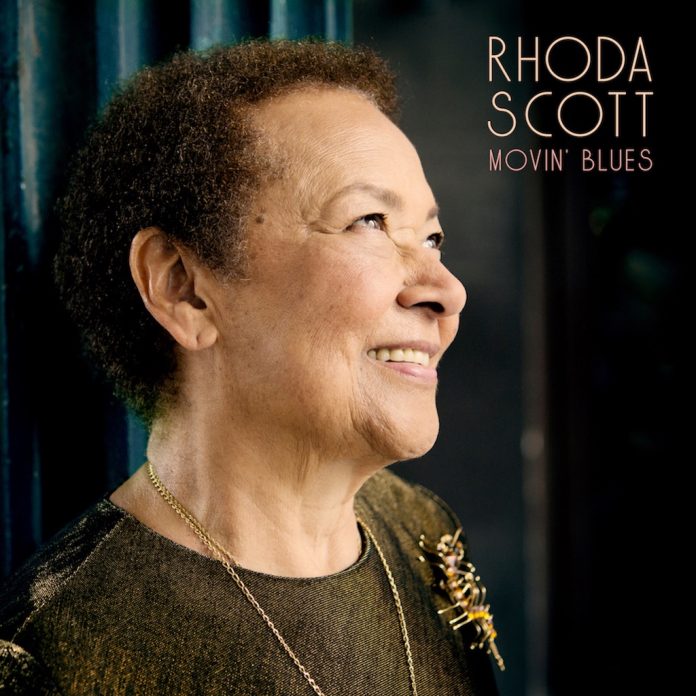 It is obvious from the first note what organist Rhoda Scott’s Movin’ Blues is about: the gospel and the blues. A minister’s daughter, Scott played organ in church from a young age and her experience in the Afro-American church permeates her playing style. Scott subsequently developed her style in the chitlin’ circuit of Eastern and Midwestern clubs frequented by black fans of rhythm and blues and straightforward jazz. Both deeply rooted flavours – church and chitlin’ – of her modern jazz stew are readily identifiable, for example in Come Sunday, a sermon that is a playground of tension, release and climax and would more than suffice as accompaniment for Mavis Staples or, for that matter, pater familias Pops.

Scott has generally been undervalued in the United States but is very popular in Europe, particularly France, her home base since 1968. As the veritable “Barefoot Contessa of the Hammond organ” – she has played the bass pedals with her bare feet since her childhood – Scott continues a fruitful career that got underway in 1963 with the support of Count Basie. Her work on the French Barclay label, including records with Kenny Clarke and the Thad Jones/Mel Lewis Orchestra, is a prominent part of her discography. Scott’s latest release is on Sunset Records and recorded in the tried-and-tested format of organ and drums. Her swinging drummer of choice, Thomas Derouineau, expertly colours the blank spaces. My sole quibble is the drum sound, which lacks the bite and edge that is essential to the rhythm and blues-infused genre of soul jazz.

Scott’s version of Caravan is sprightly. Honeysuckle Rose would be rather forgettable without Scott’s contagious enthusiasm. Throughout her career, Scott has interpreted the French chanson and here she adds a lovely rendition of Dans Ma Vie. However, it is the blues tunes that spice things up. A driving shuffle underlines title track Movin’ Blues, a juke-joint flag-waver that quotes the traditional Wade In The Water. A catchy stop-time rhythm marks Blue Law. Terse lines dance on the waves of Blues At The Pinthière’s slow groove.

Best of all is I’m Looking For A Miracle, a soul song full of anger and sorrow that brews under the surface, definitely Scott’s most dramatic reflection of her people’s plight on Movin’ Blues, digging up a mere handful of hope from the gutter with a measly spade. This is music for the waitress with the surly boss, the labourer on the nonsensical 12-hour shift, Aunt Belle the treasurer of the Presbyterian Church and the guy that cleans the scribbling on the men’s room wall. A dirty job and somebody was forced to do it.

Opportunities to hear the down-home Afro-American style are few and far between, simply because of the fact that many of its stylists have perished. The release of Movin’ Blues is a welcome reminder of that unique bygone era.