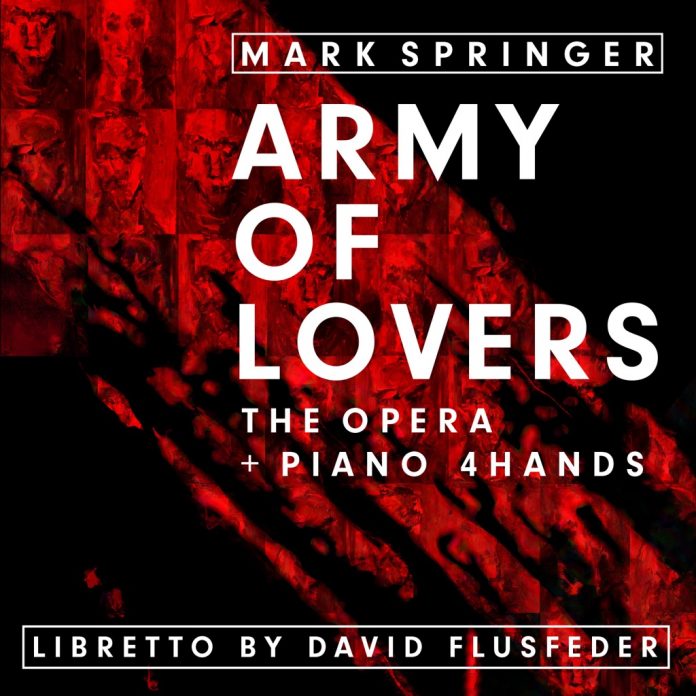 The main focus of this new release by pianist and composer Mark Springer is Army Of Lovers, a one-act, 31-minute opera for three male voices. It is set during the last days of the Sacred Band of Thebes, an army described by Plutarch as deriving its power from the strength of the bond between each pair of its 300 lovers. Theirs is a tale of the complexity of love and duty, identity and patriotism, played out against the dire consequences of battle.

Powerfully sung with a strong, austerely romantic piano accompaniment, this is a major work of modern chamber music, which, given its limited cast, should by rights quickly become a feature of the common repertoire. It is, however, a work well beyond the usual remit of Jazz Journal.

Of more immediate interest are the two pieces for piano, each one in three movements. They both share Springer’s trademark percussive, repetitive approach, his dark, hypnotic harmonies and, again, his austere romanticism, the combination of which co-pianist Pietro Bonfilio describes as “ordered freedom”. With both pianists sharing one piano, there is an obvious tendency for each to operate at either end of the keyboard, which makes the many occasions when they play in the mid-registers all the more interesting.

While through composed, there is a spontaneity about these performances that is refreshing and intriguing. Like the opera above, this music operates far from the usual world of jazz, but the pianism of these pieces, and their execution, makes them a fascinating listen.