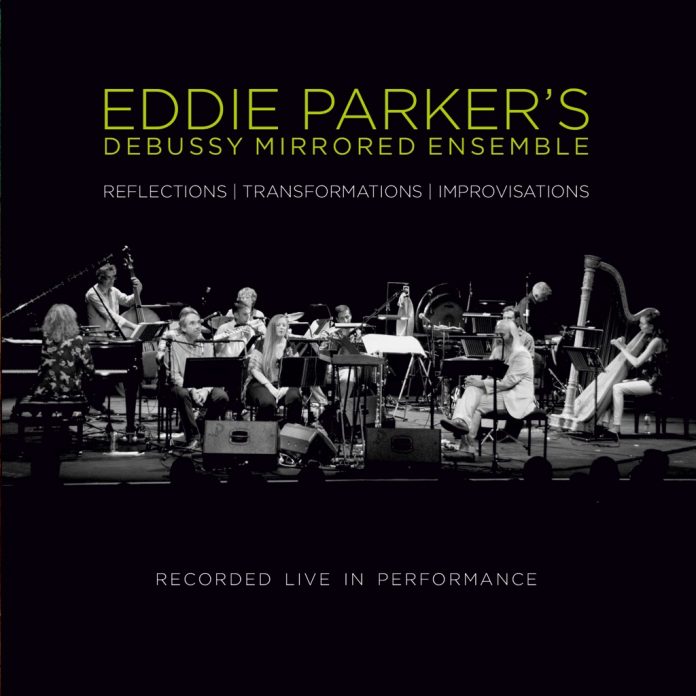 This is another example of jazz compositions and arrangements inspired by Western classical music, this time with the music of Claude Debussy as the source.

There are many examples of the influence of Debussy on jazz, of course, particularly it seems in terms of piano, whether solo or in small group contexts. However, here we’re talking about a relatively large ensemble of 12 players, carefully selected to deal with the complexities of playing this music, from the fields of jazz, classical, and for the want of a better term “world” music, as befits Debussy’s varied musical interests. The compositions are all by Eddie Parker, and the recording was licensed by BBC Radio 3, and it’s not difficult to see why it would fit with their programming needs.

De Soir brings forth notable solos from Alcyona Mick on piano and Gareth Lockrane on piccolo. Little Shepherd is seemingly inspired by the Debussy quote on the CD liner – “My favourite music is those few notes an Egyptian shepherd plays on his flute: He is part of the landscape, and knows harmonies that aren’t in our books”. The longest track, X-Boite Á Jou Jou, spirals out from some freer elements into a perhaps more familiar Eddie Parker flavour, reminiscent of some of his writing for Loose Tubes, and inspiring fine solos from Lockrane and the leader.

Clair De Lune, one of Debussy’s most famous works, gets a gamelan-like treatment, via Simon Limbrick’s vibes and percussion. The gamelan flavours are in keeping with Debussy’s output, given that his piano composition Pagodes was inspired by the Javanese gamelan he would have heard at the Paris Exhibition Universelle, an extraordinary World’s Fair in 1889, for which the Eiffel Tower was constructed.

This album is a great achievement in utilising Debussy’s music as an inspiration in a contemporary jazz context.

Steve Voce - 28 May 2022
Apart from the amazingly consistent Miss Washington, the two elements that make this outstanding amongst her albums are the accompaniments by Quincy Jones and his lads and the superior...