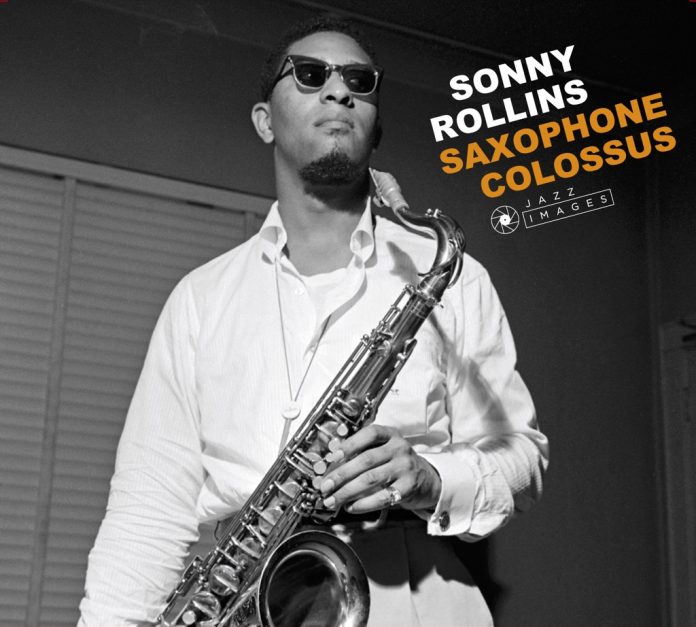 Simply titled – but it would catch the eye of any jazz connoisseur. This rich reissue is actually a double-CD compilation of four major albums by Sonny Rollins: Saxophone Colossus, The Sound Of Sonny, Way Out West and Newk’s Time, all between the years of 1956-1957. The package includes a wealth of information about each album and a booklet presenting all original liner notes.

As well as the fabulous music we get a selection of rare, eye-catching images from Francis Wolff that tell the story of each musician in action. The Jazz Images series thus pays homage to another art which helps convey the atmosphere of the time and provides powerful context – a nice touch and a key element in this reissue.

As far as the music goes, Saxophone Colossus – an album that was recorded only four days before Clifford Brown and Richie Powell were tragically killed in a car accident – includes a favourite of mine, Blue Seven, with a captivating introduction on bass and Rollins exploring extended harmony in the chorus.

By this time, Sonny Rollins was known for taking unconventional songs and converting them into jazz treasures. Such an example is Toot, Toot, Tootsie, Goodbye on The Sound Of Sonny. Way Out West, meanwhile, was a landmark in an ensemble context, stripping out the usual piano and representing Rollins’ first album in a trio setting. That same year he was acclaimed New Star by Downbeat.

The final album here is Newk’s Time, offering a variety of appealing heads and heavy solos. It has Rollins back in a quartet setting with some major players alongside him including Philly Joe Jones, who providing climactic flourishes in Wonderful! Wonderful! and The Surrey With The Fringe On Top.

John Coltrane’s A Love Supreme is one of the unassailable heights of jazz, revered for its spiritual intensity and incantatory devotion but rarely played...
Read more
Audio Reviews

Cedric Caillaud and his little group take an intimate look at some of the less familiar classics from Antonio Carlos Jobim’s extensive songbook. Known as...
Read more
Audio Reviews

Australian-born vocalist Gemma Sherry has been resident in NYC and Philadelphia since 2010, and studied vocal improvisation at the New School under Billy Harper. In...
Read more
Audio Reviews

Although the title of this CD implies this is a release by the long-established Jazz Bigband Graz, a quick glance at the personnel shows...
Read more
Audio Reviews

Judging by its title and the cover photo depicting Newcomb and his bass playing son Jake, the main sales pitch of this release is...
Read more
Audio Reviews

Most if not all of the titles on this compilation have been issued on various CD sets, including the excellent 2002 Proper Box anthology...
Read more
Audio Reviews

If there is one thing that jazz fans are probably missing most of all during the current pandemic, it is the ability to go...
Read more
Advertisement

The American Dream suggests that for those ready to work hard, America will deliver success. For Luigi Nistico, a small boy from Naples...
Read more
Audio Reviews

We’ve had to wait eight years since Mick Foster last released an album but if there was ever an appropriate time to bring out...
Read more
Audio Reviews

Whether its Ella Fitzgerald Sings The Rodgers And Hart Song Book or Oscar Peterson Plays Harold Arlen, the idea of a “songbook” was one...
Read more
Audio Reviews

Jackets XL will not come as a surprise to close followers of the Yellowjackets. Frontline member and woodwind specialist Bob Mintzer’s affiliation with the...
Read more
Audio Reviews

“Nightports is based on a simple but unbreakable rule of restriction: only sounds produced by the featured musician can be used. Nothing else. These...
Read more
Audio Reviews

Placed among the best Italian crooners since 2012 by Jazziz magazine, Massimiliano Coclite has made a name for himself on the European scene. He...
Read more
Audio Reviews

Esteemed US pianist and prominent composer Brad Mehldau used his time wisely during the COVID-19 pandemic. At home with his family based in the...
Read more
Audio Reviews

It’s been 20 years since Anna Lundqvist and Jonas André last found themselves making music together. Reunion was a chance for them to regain...
Read more
Audio Reviews

Throughout his 25-year career, Mahanthappa’s sound has been dominated by a wide array of varied influences, stretching from standard bebop to dynamic fusion....
Read more
Audio Reviews

Since the inauguration of the group back in 2012, On Dog have released one album in two volumes prior to Dielectric and have stacked...
Read more
Features

I was eight years old when I first began to play the saxophone and since that time, I always remember my grandfather mentioning somebody...
Read more
Audio Reviews

The Hemiola Trio are a fairly unknown group based in Barcelona with a name simply derived from a rather specific...
Read more
Audio Reviews

Saxophonist and flautist Chip Wickham already has a noteworthy reputation on the British jazz scene, having previously released Shamal Wind in 2018, based upon...
Read more
Audio Reviews

A collection of 15 original compositions, Vena is trumpeter and flugelhornist Rachel Therrien's fifth album. It's is a remarkable creative exercise but also has...
Read more
Audio Reviews

It was back in 1990 when Mark Monts de Oca and Jimmy Rivera assembled a quartet together at the Apple Jazz Club located on...
Read more
Audio Reviews

Born in Morocco, Albare (Albert Dadon) grew up in both Israel and France, some fair distance away from the bossa motherland. He now lives...
Read more
Audio Reviews

Having retired from almost 40 years of performing, Ibrahim Ferrer was shining shoes in 1996 before being approached by Afro-Cuban All Stars’ band leader,...
Read more
Audio Reviews

One of the most impressive groove-based jazz musicians on the German scene today, Matti Klein has performed at some of the most prestigious jazz...
Read more
Audio Reviews

“An instrumentality that connects. The process of bringing ideas or events together in memory or imagination”. This rather poetic statement sits alongside the album...
Read more
Audio Reviews

Planted within the current sound of contemporary Afro-Cuban music, this four-piece ensemble have reunited after six years to deliver their first album together, Cuban...
Read more
Audio Reviews

After recording her debut album in 2017, Life On Land, London-based pianist Joy Ellis has released her second, with the same line-up as the...
Read more
Audio Reviews

Following on from their 2014 release Out Of Hand showcasing saxophonist Houston Person, the Peter Hand Big Band are back with yet another mesmerising...
Read more
Live Reviews

This concert was one of several in an all-day celebration at the Southbank Centre to mark the 50th anniversary of ECM Records. The Queen...
Read more
Live Reviews

This performance added a new level of intensity and spiritual meaning to the EFG London Jazz Festival. It drew a wide demographic of jazz enthusiasts...
Read more
Live Reviews

Directed by Matt Roberts, this 13-piece band were back again for another passionate night of music making. Roberts has delved into both jazz and...
Read more
Audio Reviews

This album focuses on NASA’s Apollo 11 project, which flew to the moon and back in the late 1960s; it celebrates the 50th anniversary,...
Read more
Audio Reviews

Melody Gardot: Sunset In The Blue

Whilst there is no shortage of female singers in the world of jazz, there is definitely a premier league which Melody Gardot cohabits with...

You may know him as George Joyner, Jamil Sulieman or Jamil Nasser but the last name is probably best known and the one he...

This record represents some­thing of a seduction job. It offers two of the most melodic of play­ers using their instruments to really 'take' the...