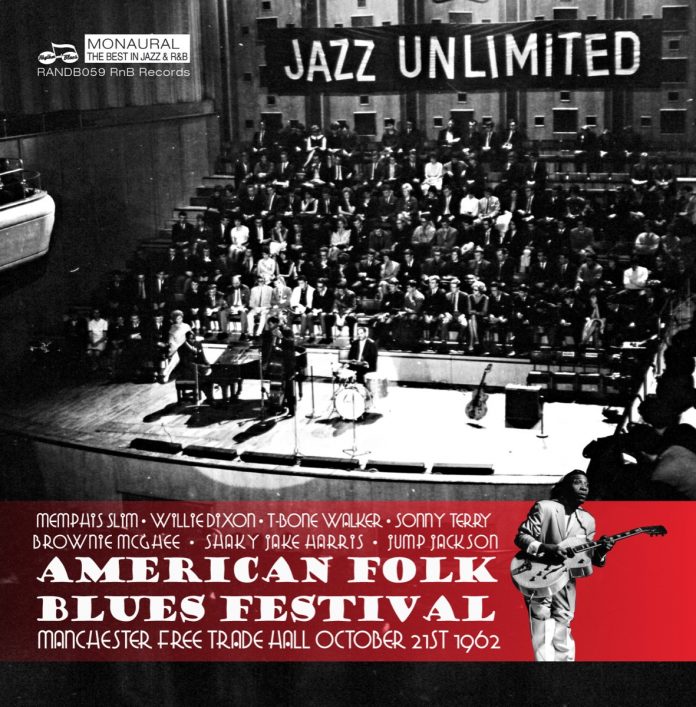 This is a record of a hugely significant moment in the British blues and R&B scene of the 60s, when for the very first time a UK audience became exposed to authentic American bluesmen. The event was attended by such devotees as Mick Jagger, Paul Jones, John Mayall, Keith Richards, Brian Jones and Jimmy Page. The only debate surrounding this memorable occasion seems to be how all these individuals actually made their way to the gig.

The second of two shows was filmed by ABC TV and broadcast in two parts for its Tempo programme. Hence the amusingly clipped tones of the announcer at the start of this CD. It should be noted that Helen Humes, John Lee Hooker and Shakey Jake Jackson were also part of this package and are part of the ensemble on the final track Bye Bye Baby. The sound quality is not exactly hi-fi but is perfectly acceptable.

This is only a flavour of the evening’s performance, with Sonny Terry, Brownie McGhee and T-Bone Walker taking care of the lion’s share of the music. The songs are from the classic repertoire of the blues and several became recognisable to a wider audience thanks to the young British musicians who passed on their enthusiasm to their receptive contemporaries.

None of the performances are especially outstanding but one can imagine the rapt attention they must have received from the 2000-strong audience who had travelled from far and wide to experience their idols in the flesh. After all, who could resist the special rapport Sonny and Brownie displayed in their years-long partnership, or the authority T-Bone Walker could display on his very own Call It Stormy Monday?

It is a shame we don’t have a complete record of the evening’s events but this will do nicely as a reminder of how momentous an occasion this really was.

As is apparent from the words of several writers quoted in the accompanying 20-plus-page booklet, Dakota Staton covered a wide stylistic range and this...

This book, which first appeared in 2012, is the product of 15 years of research which spanned the death of the author’s wife and...

Not before time, this is a paperback reprint of the valuable collection of essays by Max Harrison, first published by David & Charles in...

"This is a record of a hugely significant moment in the British blues and R&B scene of the 60s, when for the very first time a UK audience became exposed to authentic American bluesmen"Peter GambleAmerican Folk Blues Festival Manchester 1962 (Various Artists)
Advertisement