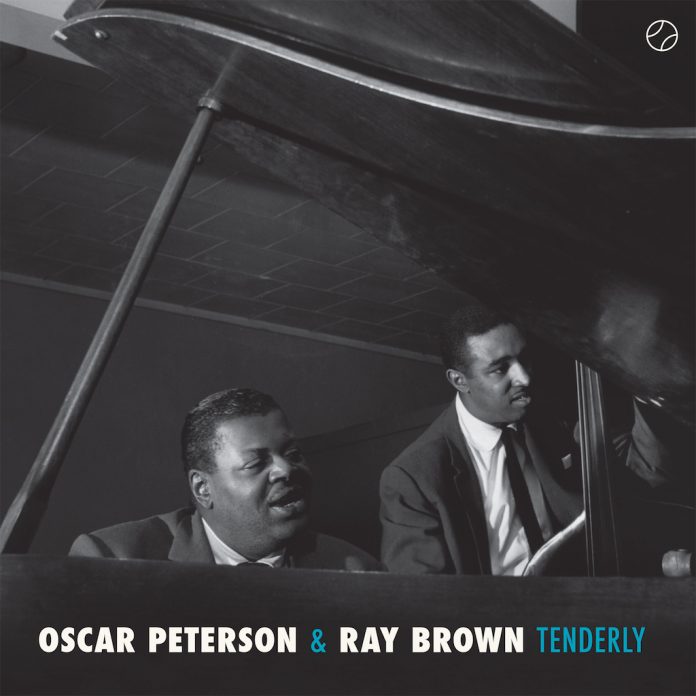 In this country we were first amazed by Peterson on a couple of HMV 78s done in his native Canada in 1945. The tracks in this album, from 1950, were Peterson’s first studio recordings for Norman Granz. By the time of his signing for Granz he had matured in octave leaps and had become the most gifted jazz pianist outside of Tatum.

But we weren’t to hear the transformed Oscar until the mid-50s, when a 10” LP with Astaire Blues, done in 1952 by Oscar’s quartet, eventually sneaked out expensively as Granz’s first British issue.

To say that we were overwhelmed would be to understate the advent. Peterson’s records were sensational. But soon the critics decided that he played too many notes (maybe he did) and Granz gave us Peterson-with-everything so that the plethora of Peterson albums soon sated the audience.

Initially Norman signed Oscar in 1949 for JATP tours. Concerts showed Oscar at his most spectacular – the restrained three-minute Tenderly here bears no relation to the bravura 10-minuter that Oscar developed in concert.

With this album we are able to make a detached assessment. Peterson and Brown had a top-level rapport that the pianist never found with any other musician. Debut opens in an extended slew of multi-notes with Ray slightly under-recorded, so that he is merely keeping time whilst Oscar’s mental processes snap through their remorseless parade. The cascades in the embryo Tenderly are similar to the concert ones before the sudden switch into the swinging tempo that was such a Peterson forte. The power and drive is already there but the sweat only came with live performance – but whichever version, the treatment produces a minor classic.

Welcome though Kessel and Stoller were to make up the eventual quartet, the tasty stuff is here in this most effective duo. The piano’s muscular filigrees are brightly lit and its inventions fresh-sounding again, although the unfamiliar three-minute length inevitably curtails them abruptly. The material chosen is of the highest level throughout.

This is a thoroughly delightful set that makes the experience like hearing Oscar for the first time. Maybe I’m nit-picking about Ray not being prominent, but then Norman never gave a damn about what he regarded with scorn as hi-fi.

Gareth Thomas - 05 April 2021
The third instalment in a series of compilation albums, J Jazz Volume 3 – like its predecessors – is a deep dive exploration into modern jazz in Japan from...

Jazz Journal - 22 March 2020
This is a collection of pieces which Philip Larkin wrote for the Daily Telegraph over a period of years. His introduction contains an account of his addiction to jazz,...