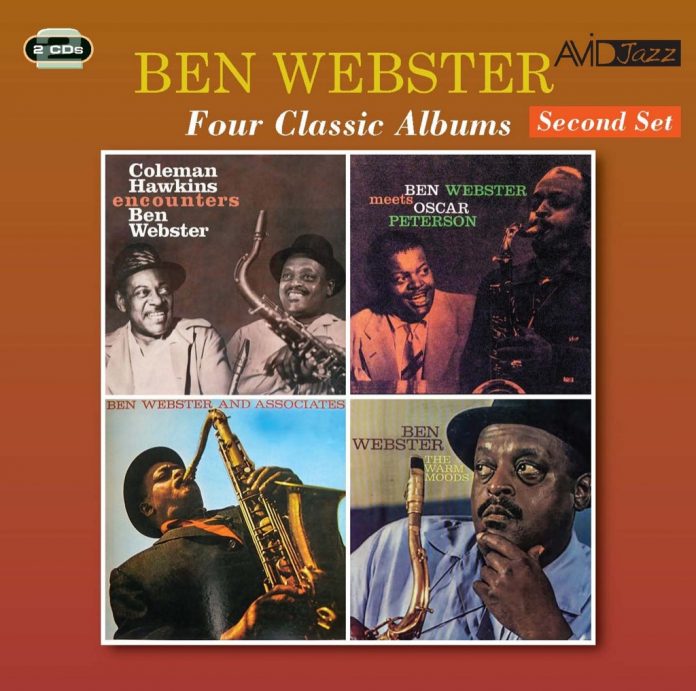 It’s impossible to anatomise the splendour of mature Ben Webster. The endless flexibility of tone, the spare perfection of the phrasing, the masterly ease with time – they add up to a unique and authoritative voice. Of these four albums, the one which catches it best is Ben Webster Meets Oscar Peterson. It’s irresistible. Notable moments include the elegant simplicity of the melody in The Touch Of Your Lips, the pathos of the falling accents in When Your Lover Has Gone and the harmonic alterations to In The Wee Small Hours. These last, I presume, are largely the work of Peterson, who plays with marvellous sensitivity throughout. The familiar quartet format imposes its own discipline on the proceedings, with Webster’s tenor setting the tone for the session, Peterson in constantly alert support and plenty of space for Ray Brown and Ed Thigpen to operate as the superb team they were.

Coleman Hawkins Encounters Ben Webster has always struck me as a curiously unsettled affair. Blues For Yolande begins almost like a parody of a down-home blues and even the immaculate Peterson sounds edgy. Hawkins’s tone is raw and uneven and his phrases brusque and unfinished. Perhaps this is what Lewis Porter, writing in the New Grove Dictionary of Jazz, meant by “Hawkins’ tone had hardened somewhat and he developed a fierce approach to the blues”. Things improve a little after this, but Ben, who as a young man had idolised Hawkins and was always somewhat in awe of him, remains slightly subdued throughout.

Ben Webster And Associates is much better, the big surprise being Budd Johnson. He was only a few months younger than Ben, but his style clearly matured later into swing with bebop overtones. He was a last-minute addition to the session, and his bright, modernistic playing wakes things up considerably. It’s a casual set, but by no means desultory. Hawkins is more like his old self, playing beautifully on the blues Young Bean (“Bean” being his nickname), and Roy Eldridge and Les Spann add effective contrast to the tenor triumvirate. Ben surpasses himself in his solo ballad, Time After Time.

Warm Moods is a “with strings” album, the strings being a quintet with two cellos. As a demonstration of how to embellish a melody, it’s impressive, especially With Every Breath I Take and But Beautiful. I often found myself wishing he’d take another chorus, but it wasn’t that kind of session and perfectly good for what it is.

Bruce Lindsay - 07 May 2020
One of the best-known and most stylish blues duos of all, Sonny Terry and Brownie McGhee get a deserved Avid Roots release for four of their albums, recorded between...