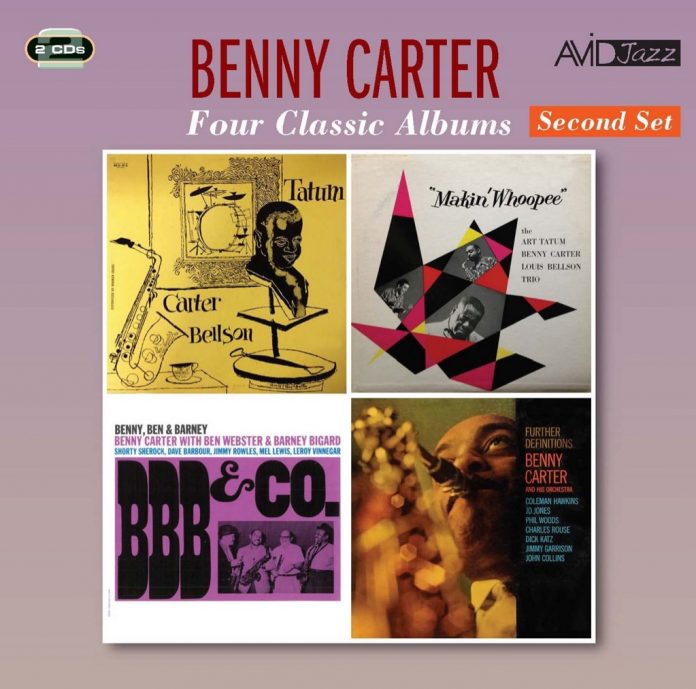 This splendid anthology of Carter recordings – the second from Avid – is equal to if not better than the first. Curiously, however, the 14 selections on CD1 are reproductions of Volume One of The Tatum Group Masterpieces sessions, and should properly appear under Tatum’s and not Carter’s name. That quibble aside, the Tatum/Carter/Bellson collaborations are jewels in their respective crowns.

Bellson generates perfect tempos and punctuations for the two principals, both of whom produce what can properly be called “immaculate” performances. Benny Green’s sleeve notes to the superior Pablo CD release include the pertinent comment that Blues In C opens with “an unaccompanied piano solo which defines in a few bars the entire history of the Blues”. It is followed by an undaunted and hard-swinging Carter supported by an explosive Bellson. In later Group Masterpieces sessions (apart from the ones with Ben Webster and Buddy DeFranco) Tatum either ignored or overpowered his guests including Roy Eldridge, Lionel Hampton, Buddy Rich and Harry Edison. Not so here. On every track, Tatum and Carter as soloists complement each other with effortless ease. Try, for example, Blues In B Flat; simply sublime: down-home Art and an aristocratically wailing Benny. The unusually decipherable (for Avid) but anonymous notes (but certainly by Norman Granz) state that “Benny and Art became so enthused on this date that instead of doing only one album we did two”. They did, and we should rejoice.

Most commentators agree that Further Definitions is perhaps the best of Carter’s 1960s albums, displaying his talents as arranger, composer (Blue Star and Doozy), leader and soloist on alto. Reprising (instrumentally) the 1937 session that Carter and Coleman Hawkins with Django Reinhardt made in France, 30 years later, they are in the congenial and compatible company of Phil Woods, Charlie Rouse, Dick Katz, John Collins, Jimmy Garrison and Jo Jones. All are in fine fettle – with Bean at his majestic best on Honeysuckle Rose, Body & Soul and Crazy Rhythm. Carter joins him on a languorous Blue Star, while all the four reeds – Carter, Rouse, Woods, Hawkins in that order – feature on Cottontail, on which Katz delivers a sparkling solo before the saxes take it out. Carter leads the introduction to Cherry, with notable contributions from Woods and Rouse. A rocking rendition of Doozy has the saxes playing in unison before Woods, Hawk, Carter and Rouse make authoritative and individualistic statements.

Despite its stellar line up, the session which produced BBB & Co fails to really catch fire until the closing When The Sun Goes Down Blues. But Carter shines brightly on trumpet and alto, Bigard is, for want of a better phrase, “Bigardian”, Webster almost insolently on auto-pilot, while Sherock contributes some arresting high notes. Needless to say, the bespoke rhythm section takes everything in its stride. The best tracks are a gently-swinging Lula and a ruminative When The Sun Goes Down, with the underrated Barbour contributing a plangent solo, and Bigard and Webster sounding more engaged. All in all, this is a very satisfying compilation of mid-period Carter.

Bruce Crowther - 06 June 2022
On this, her third album, Michele Thomas has selected her repertoire from standards and some lesser-known songs, as well as three on which she is credited with words and...