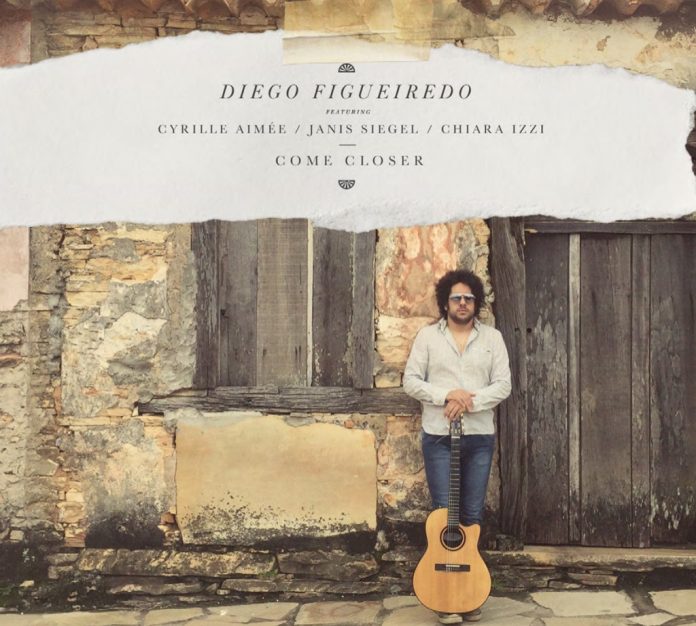 Brazilian guitarist Diego Figueiredo, has made over 20 CDs. He’s played with João Bosco, Gilberto Gil, Roberto Menescal and Larry Coryell amongst others and has recently toured the world with Cyrille Aimée, Janis Siegel and Chiara Izzi. On Come Closer he is the solo accompanist to these three vocalists.

The album comprises a diverse mix of songs from Jobim, Don Redman, Mancini and My Fair Lady together with jazz standards. Two of the tracks are instrumentals – Van Heusen’s Like Someone In Love and Figueiredo’s own composition, Sexta Fiera.

Each singer has their own section rather than being loosely spread across the album. Aimée is on first with four relatively brief numbers that she completes within 10 minutes. She’s followed by Siegel whom you may recall from her years with Manhattan Transfer. Siegel is allocated twice the time for her four contributions, which involve extensive scatting. I hadn’t come across Chiara Izzi before. She’s an Italian singer based in New York and closes the album with two songs – Miles Davis’s Nardis with lyrics in Portuguese and Moon River. Izzi has an unusual voice and her version of the latter number is impressive.

I was particularly looking forward to hearing Aimée on the album as I’ve always rated her abilities highly. Unfortunately, her take on I Could Have Danced All Night is markedly slow and suffers from inevitable comparison with earlier spritely versions. Similarly, her interpretation of Whatever Lola Wants lacks the catchy tango beat that we have come to expect with this number. Indeed, for some reason every track on the album appears to have been slowed down and denied the zip that many deserve. Whilst individual songs are absolutely fine on their own, when heard consecutively they lack variety as a whole.

It’s certainly a relaxed set and pleasant enough in its own way but would the album pass the litmus test of being played more than once by the listener? Of that I’m not so sure.

Elliot Marlow-Stevens - 05 April 2020
John Stein has accomplished a great deal as a guitarist, with a lengthy list of album releases, a career teaching at the Berklee College of Music, and sessions the...

Jazz Journal - 28 November 2021
Archie Shepp is a brave man. He is totally exposed musically for most of the 41 minutes of this album, with only a bassist for accompaniment (although Niels-Henning is...