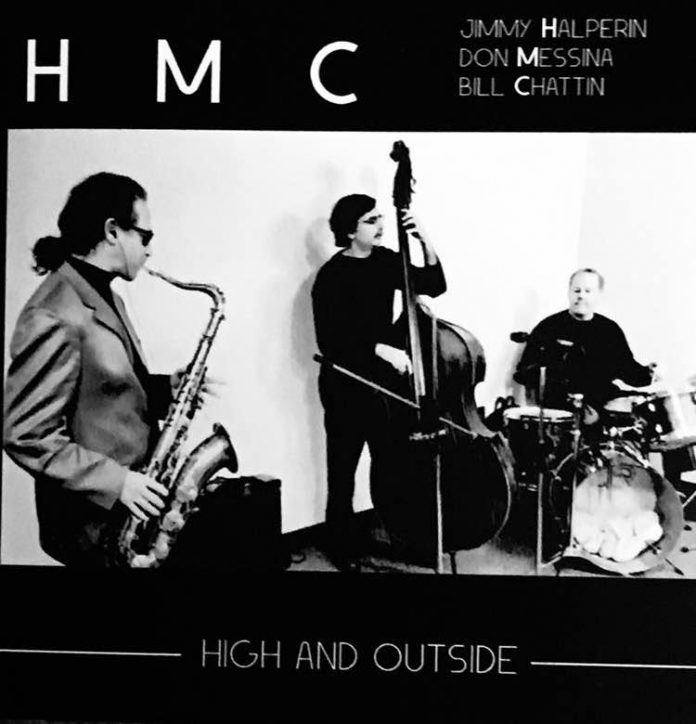 “HMC” is Halperin Messina Chattin. Tenor saxophonist Jimmy Halperin was born in 1958 in Queens, New York, and from 1970, at a remarkably young age, was involved in the music of Lennie Tristano. He studied with Tristano and after the latter’s death in 1978, with Sal Mosca; in 1986 he recorded Back Home with Warne Marsh. He recorded a duo with Mosca, Psalm, in 1997. Halperin has been a key member of the group of Tristano musicians in the New York area.

In a blindfold test, I’d have identified the saxophonist as Warne Marsh – given that Marsh was a genius, hardly a criticism – and some extensive listening is needed to distinguish them. By email, Halperin comments that “I was attracted to Warne’s playing when I heard him on Jazz From The East Village … His sound was so light and cool, and his ideas so spontaneous … combined with [his] complex chromaticism and modern intellectualism, it was a revelation”. He adds that Tristano regarded jazz improvisation as “‘great art’, which demands certain conditions from its practitioners … a vast amount of study and practice [is] involved”. In subsequent studies, Sal Mosca’s “abstract and powerful use of harmony and phrasing still influence me … my path appears to have been predestined, my musical choices and influences laid out in front of me”, Halperin writes.

His work is as spontaneous as Marsh’s. As one writer comments, it’s coolly objective, intricate and with compelling restrained tension. This trio sessioned from 2000 to 2004, and subsequently with Mosca, recording Cycle Logical, and the quartet with Mosca You Go To My Head. Bassist Don Messina studied with Mosca student Fred Amend; drummer Bill Chattin studied with Alan Dawson and then Tristano. Messina says “[Jimmy] and I were able to stretch the traditional harmonies of the standard tunes in the moment … Jimmy, like Sal, was able to bring forward … hidden voicings of the changes … making me play an improvised line based on what he was playing … Bill [Chattin] dug in deeper … yet lightly and softly – it was a trio that moved forward together”.

The programme is familiar Tristano standards and contrafacts – April (I’ll Remember April), Sax Of A Kind (Fine And Dandy), Marionette (September In The Rain), Smog Eyes (There Will Never Be Another You), and High And Outside – a Halperin original based ultimately on Darn That Dream. The result is inspirational spontaneous improvising of the highest quality. The Tristano school paradox is that its music is intuitive and impassioned, but mischaracterised as dry and cerebral. Yes, it’s cerebral – and passionate. These players receive little remuneration or recognition for their work – they’re dedicated artists, pursuers of art for art’s sake. Their music has immediate appeal, and deeper rewards with repeated listening.

HMC Trio: High And Outside is available from Amazon and shortly on iTunes, or order directly from Jimmy Halperin or Cadence Jazz Records.

Matthew Wright - 24 December 2020
Here we have two overlooked Tony Bennett albums from the late 60s – a decade of mixed fortune for the singer. It started with him at the pinnacle of...