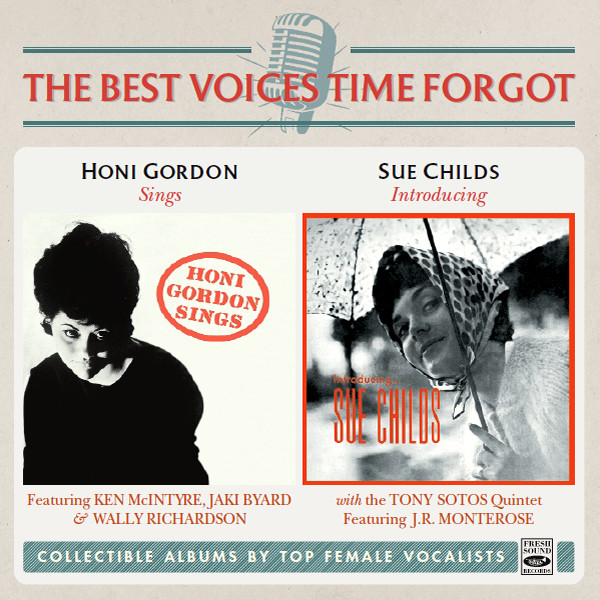 Honi Gordon, whose time in the jazz spotlight was all too brief, came from a musical family. In 1956, together with her father and two brothers, she performed on a Lionel Hampton session (Fresh Sound FSRCD 446) and the following year they were on a Dizzy Gillespie-Stuff Smith date (Verve 513875-2CD). In 1959 she was one of the backing singers together with Babs Gonzales and Ned Gravely for Eddie Jefferson’s Body & Soul – Eddie’s homage to Coleman Hawkins (Inner City 1016). That same year she appeared on Charles Mingus’ Dynasty album where she was featured on Strollin’ aka Nostalgia In Times Square (Columbia 065145).

Ms Gordon’s rich, husky-voiced contralto is reminiscent of early Sarah Vaughan and on this reissue she is clearly inspired by the intimate surroundings provided by Jaki Byard and company. Eschewing the standard song-book repertoire one might expect on a debut album she performs fairly obscure material, some of which was composed by her father. The exceptions are I’ll Wind which compares favourably to versions by Ella Fitzgerald, Dinah Washington, Ernestine Anderson, Lena Horne etc., and Why Try To Change Me Now which benefits from a sensitive half-chorus from Jaki Byard.

There is a mystery concerning My Kokomo which has the hallmarks of an Annie Ross piece of vocalese. Honi’s unerring grasp of the tricky melodic and rhythmic line seems to reflect the characteristics of an improvised jazz solo but I have been unable to track down the source. Perhaps one of our well-informed readers can identify the origin of this track?

Sue Childs’ musical resumé is even more modest than Honi Gordon’s as this was her only recording. The timbre of her voice reminds me a little of Frances Faye but she is a far more accomplished singer as she demonstrates on this fine set of well-known songs.

Jerry La Furn contributed the swinging charts and in Honeysuckle Rose and Out Of Nowhere he has included hints of their respective contrafacts – Parker’s Scrapple From The Apple and Mulligan’s Roundhouse.

Nic Jones - 02 February 2020
I don't know if Toots Thielemans and J.J. Johnson ever recorded together for Norman Granz, but if they did I can't help thinking the results might have been more...