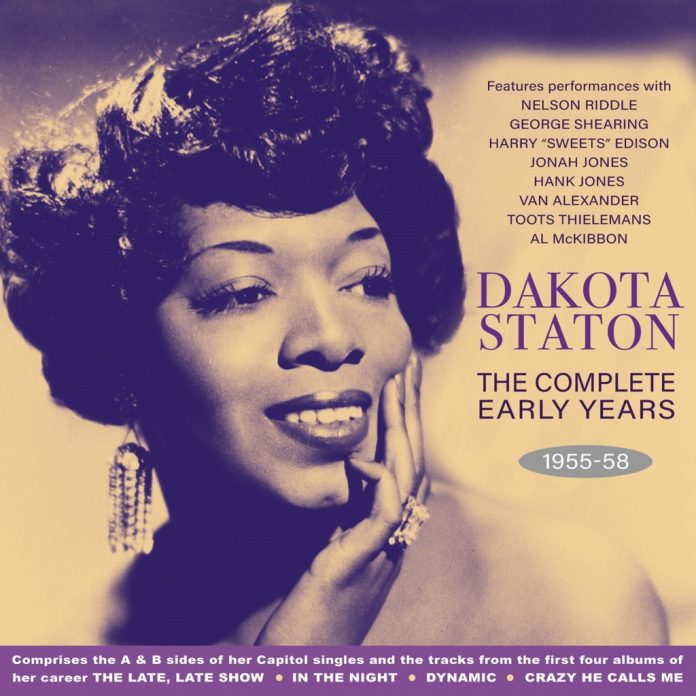 As is apparent from the words of several writers quoted in the accompanying 20-plus-page booklet, Dakota Staton covered a wide stylistic range and this tempted some of them to liken her to different singers when in one or another of her different moods. While this might be a useful shorthand method of positioning Staton in the ranks of post-war singers, it implies that she was somehow less than her own woman and this would be at best unfair.

Born in Pittsburgh, from early childhood she displayed an eagerness to sing and dance and during her schooldays she studied classical singing and in contrast sang popular music of the day with Carl McVicker’s Kadets. This was in the mid-1940s, and drawing on the popular music of the day the band played both swing and R&B. At the end of her teenage years she sang professionally with a local band but as she entered her 20s she moved to Detroit and embarked on a her solo career. Soon, she was in New York, which is where Dave Cavanaugh signed her to Capitol Records.

This collection begins with singles reflecting that time with only How High The Moon being instantly recognisable through its continued appearance in later decades. The rest of CD1 and all of CD2 is drawn from four Capitol albums: The Late, Late Show (T876), George Shearing’s In The Night (T1003), Dynamic (T1054) and Crazy He Calls Me (T1170). In many ways, all of these tracks sound like the work of a different singer. She is more melodic, more relaxed yet richer, and proves herself to be an important singer of the era.

On the first of these four albums, Staton is backed by Van Alexander’s orchestra, which includes Jonah Jones (t) and Hank Jones (p), In The Night was released under Shearing’s name, and Harry “Sweets” Edison appears in several of the studio orchestras that back her elsewhere. Never less than good, she occasionally delivers definitive performances. Very enjoyable.

Discography
CD1: (You’re) My Heart’s Delight; What Do You Know About Love; No Mama, No Papa; For The Rest Of My Life; A Little You; Don’t Leave Me Now; Abracadabra; I Never Dreamt (You’d Fall In Love With Me); It Feels So Nice; A Dangerous Age; Weak For The Man; How High The Moon; Don’t Mean Maybe; My Friend; You Know I Do; I Told You So; Trust In Me; The Late, Late Show; Invitation; The Party’s Over; Blues In My Heart; Confessin’ The Blues, Broadway; Summertime; Misty; A Foggy Day; What Do You See In Her?; My Funny Valentine (70.49)
CD2: Give Me The Simple Life; You Showed Me The Way; Moonray; Ain’t No Use; In The Night; I Hear Music; The Thrill Is Gone; I’d Love To Make Love To You; Let Me Off Uptown; Night Mist; Anything Goes; When Sunny Gets Blue; They All Laughed; I Wonder; Say It Isn’t So, Joe; Too Close For Comfort; Little Girl Blue; It Could Happen To You; Some Other Spring; Cherokee; Crazy He Calls Me; Idaho; Can’t Live Without Him Any More; Angel Eyes; No Moon At All; Morning, Noon Or Night; How Does It Feel? (69.06)
Staton (v) with various acc. NYC, LA, 24 November 1954-12 November 1958.
Acrobat ADDCD 3306

Brian Payne - 16 February 2020
Trumpeter Eduardo Blanco was born in Spain. He studied jazz in the US at Berklee and later taught music in Barcelona. He’s lived in Holland for several years now...