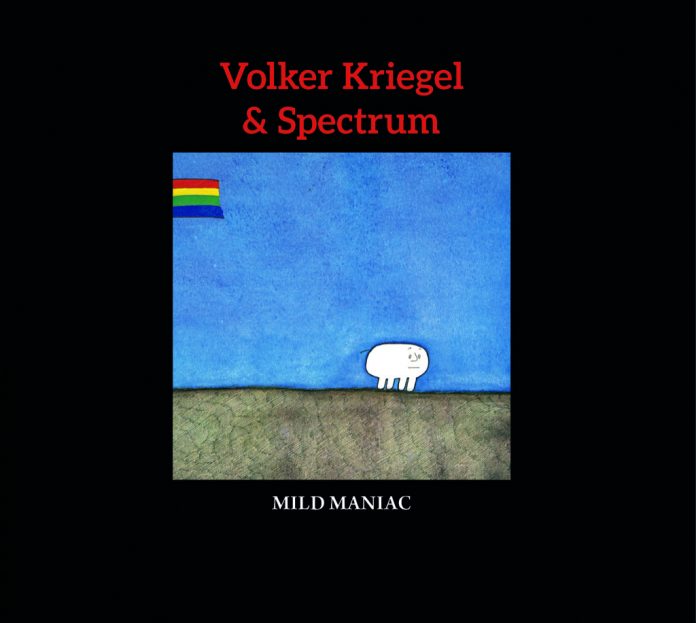 As I observed some years ago, in the course of a JJ review of the MIG/Art of Groove release Volker Kriegel And Friends: Jazzfest Berlin 81 – with, a.o., vibraphonist Wolfgang Schlüter and bassist Eberhard Weber – Kriegel (1943-2003) died far too young. Apart from his musical career, the German was a professional cartoonist of considerable charm and quality and one of his creations features on the cover here.

Kriegel was an excellent, exploratory guitarist and composer, and his etched and ringing lines were pitched somewhere between Pat Metheny and John Scofield, with the odd splash or two of John McLaughlin (hear the Mahavishnu-like Prinz Eisenherz). With distant roots in the blues (sample the opening moments of The Visit or parts of the solo Eisenherz TV take) Kriegel explored a wide range of both acoustic and electric sound and “attack” and was open to many a processed “world music” mood, at times cultivating a sitar sound or folk-touched ethos. Parts of the title track here, as well as the later Natural Space, are not that far from the world of Bert Jansch, John Renbourn and Pentangle.

The sessions document a time when, having worked with improvisers of the quality of Albert Mangelsdorff, Heinz Sauer and Zbigniew Seifert, Kriegel committed himself to developing aspects of the sort of jazz-rock he and fellow-traveller Weber had explored in the group of American vibraphonist Dave Pike. A founder member of The United Jazz and Rock Ensemble, Kriegel wrote in an essay of 1983 that “As pathetic as it may sound, jazz rock offers the chance to reconcile body and soul”.

Spectrum was one of Kriegel’s best groups and Mild Maniac has long been considered to be perhaps its finest recording. Kriegel’s compositions have no little character; Nay and Weber lay down a purposive but also breathing groove, exemplified by the opening Mindwill, and there’s more rooted yet cross-rhythmic drive and texture from Giger. Brüninghaus’s variety of colour and pushing (but not pushy) rhythm is a key factor throughout, offering adroit complement to Kriegel’s assertive albeit dynamically sensitive lines. Sample Mindwill and the combined 19 minutes of The Visit and D-Dödel for some of the best passages here, the last including some innovative “chop-handed” improvisation from Weber on electro-bass and fine, keening interplay between Kriegel and Brüninghaus.

The 1978 TV takes include some beautifully paced solo Kriegel as well as a lovely group reading of Ralph Towner’s Song For A Friend and a strong and extensive reworking of Schnellhörspiel from Mild Maniac. It all adds up to a thoroughly attractive and engaging release, including an informative and musically insightful sleeve-note from Martin Laurentius. But, “reconciling body and soul”? Not quite.

Roger Farbey - 28 August 2020
Mattias Risbergs Mining (no pedantic apostrophe needed here), hereafter referred to as Mining, named themselves, appropriately, after their 2018 debut gig in a disused mine in the heart of...