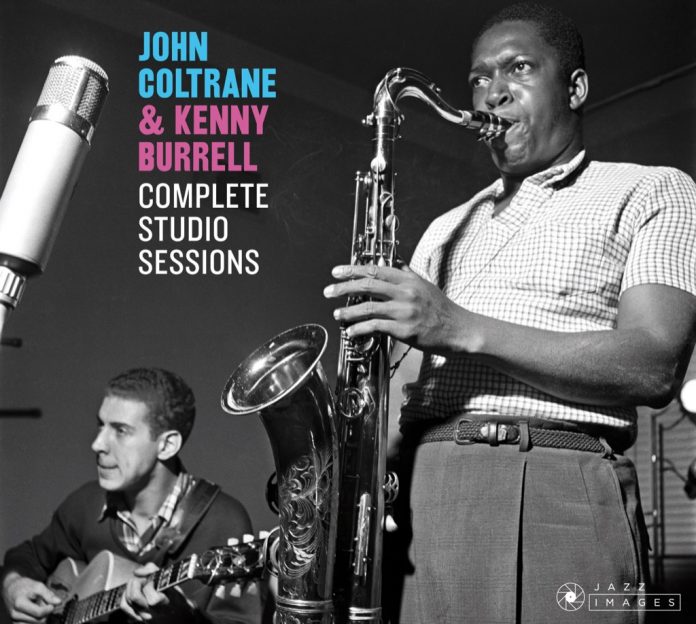 Two important points need to be stated from the outset of this review. First, despite the implication of the album’s title, this is not merely one complete set of sessions featuring John Coltrane and Kenny Burrell (as per the album bearing their names). This constitutes far more than that. There are, stretched over two CDs, in fact four separate albums included here, not just one. The years of recording span 1956 to 1958 and cover virtually all the sessions on which Burrell and Coltrane recorded together, not just their own eponymously titled 1958 date. Secondly, the first five tracks on CD1 of this set represent the only time Coltrane recorded under his own name with a guitarist on a disc that was actually issued. Whilst it’s true there was a rare occasion when Trane recorded with Wes Montgomery (working title: “Monterey Jazz Festival”, taped 22 September 1961), it was rejected for reasons unknown and consequently never released.

As far as the personnel included on the entire two and a half hours here, it’s safe to assert that they represented the absolute cream of the hard bop players of the time. Although Burrell and Coltrane had actually recorded together previously in 1951 on three Dizzy Gillespie tracks, Tin Tin Deo, Birks’ Works and We Love To Boogie, neither had soloed on these tunes to any notable extent. A compilation album Dee Gee Days: The Savoy Sessions including all three of these tracks was released in 1976 on Savoy (SJL 2209). Other Savoy reissues, The Champ and School Days, included respectively, two and one of these tracks.

From the opener, Flanagan’s swinging Freight Trane, the two principals solo with aplomb, Coltrane confidently taking the first choruses and then Burrell following in hot pursuit, his Gibson archtop plying his trademark mid-tone, incisive lines that set the standard for a myriad of guitarists. The number finally culminates in a coruscating exchange of fours. The exquisite Why Was I Born? sees Burrell and Coltrane in a duet, all the better to savour their unique interplay and Burrell’s first-class comping skills.

The three remaining albums included here could arguably be regarded as “bonus” tracks, but in this context are really far more substantial. Whims Of Chambers is powered by Philly Joe Jones’ inimitable snapping drums and Donald Byrd and Horace Silver add some extra finesse. Byrd’s We Six motors along at pace with the trumpeter initially soloing on several choruses. Coltrane follows, carefully constructing his solo by knitting together melodious phrases. Chambers gives a bravura performance soloing on arco bass at a speed most bassists would baulk at. Burrell’s solo is typically dexterous, and Silver concludes the soloing in breezy fashion.

The Cats is an upbeat session and the only album in the package which didn’t feature Chambers. It does however see Idrees Sulieman on trumpet and Tommy Flanagan on piano. Flangan’s Tommy’s Time, underpinned by Doug Watkins on bass, is a mid-paced 12-bar where Burrell is heard at his nimble bluesiest. Coltrane is relaxed here, enjoying the sonic warm bath of the blues. If nothing else (and there is plenty else) the juxtaposition of the four albums offers an opportunity to compare the differing styles of four of the leading drummers of the period. Finally, Interplay For 2 Trumpets And 2 Tenors stretches all eight musicians just a little more, given that the four horns are, essentially, vying for pole position in their respective instruments, so there’s naturally a bit of creative ooomph here. The additional brass also makes for a richer sound in the ensemble passages. But as the lone guitarist, nothing deters Burrell from making his mark, as clearly heard on Anatomy, for example.

Two tracks are omitted from Whims Of Chambers and The Cats, respectively Tales Of The Fingers and How Long Has This Been Going On? The rationale for this is that these were trio performances by the rhythm sections only. However, bizarrely, the title track from Whims Of Chambers, is included here as a “bonus” track at the end of CD2, but no explanation is given as to its partitioned status since it was actually the second track featured on the original album. No matter. This double CD set with its 16 page booklet including rare photos taken by Francis Wolff, constitutes a must buy for all Burrell, Coltrane, Chambers and hard-bop fans alike.

Jazz Journal - 25 February 2021
It is not very often that an interviewer and the person he is interviewing find themselves at harmony. Consequently one normally has to wade through yards of padding about...