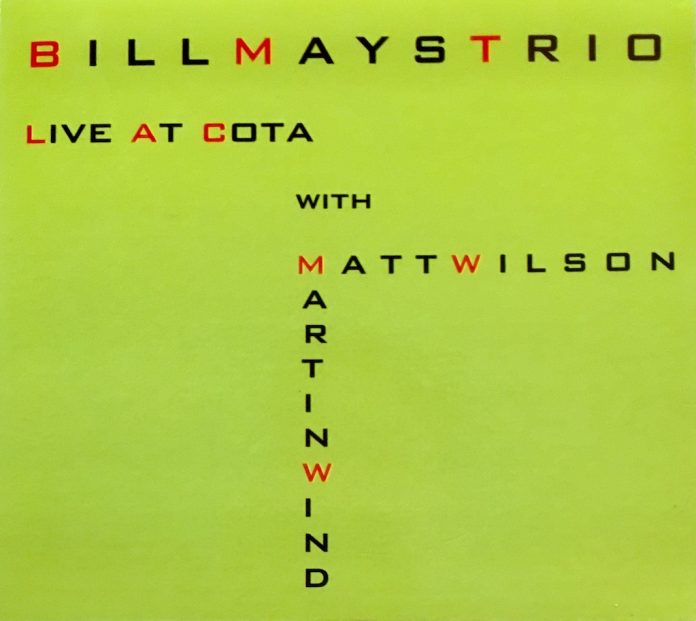 This is a really enjoyable live CD with an excellent performance from the trio, a very good piano (it belonged to the late Phil Woods) and good recorded sound, all from their gig at the Deer Head Inn as part of COTA (Celebration Of The Arts) jazz festival in Delaware Water Gap, Pennsylvania, 2018.

The set mostly comprised new material at the time for this trio, a mixture including some less road-worn standards, originals (some of which were tributes to other musicians (Tristano and Evans) by Mays, Woods and the late Bob Dorough, and other tunes by Shorter and Evans. The CD as a whole is dedicated to Bob Dorough and Phil Woods.

The Mays trio swings hard, but in a delicate kind of way. There are echoes of lots of other piano players in his playing – I can hear Bill Evans amongst many, but the swing feel of Mays’ playing seems stronger. Near the end of Next Right Thing – An Extravagant Soft-Shoe, there’s a lovely moment when (in case we’d forgotten it was a live recording of new material) Mays calls out “to coda” to signify the end of the tune to the other musicians. There are other similar examples elsewhere, including “back to letter A”, “play that figure again”, and “you wanna solo?”, all of which might be called on many jazz gigs, but here it’s cast in stone.

It’s a well-balanced set in a variety of grooves – swing, Latin, ballad, and also a quite unusual 5/4 time version of Shorter’s Infant Eyes. There’s a surprise vocal by Mays on the closing track Nothing Like You, almost Chet Baker-style, which doesn’t really seem to fit after the concentrated trio work elsewhere, but then it’s clearly a personal dedication to its composer Bob Dorough (a great fan of the trio), so there has to be a space for that. The trio are planning a recording later this year, so watch out for another release, but don’t miss this one in the process.

Discography
Darn That Dream/Dream; Sun Of The East – To Tristano; Your Story/Goodbye Mr. Evans; Next Right Thing – An Extravagant Soft-Shoe; Never Let Me Go; Infant Eyes; Nothing Like You (55.45)
Mays (p); Matt Wilson (d); Martin Wind (b). Pennsylvania, 9 September 2018.
No Blooze Music #3

Betsy Bell - 07 January 2021
Having rehearsed and played together periodically over the last two and a half years, the MPT Trio have released their debut album, a collection of eight original compositions. These...