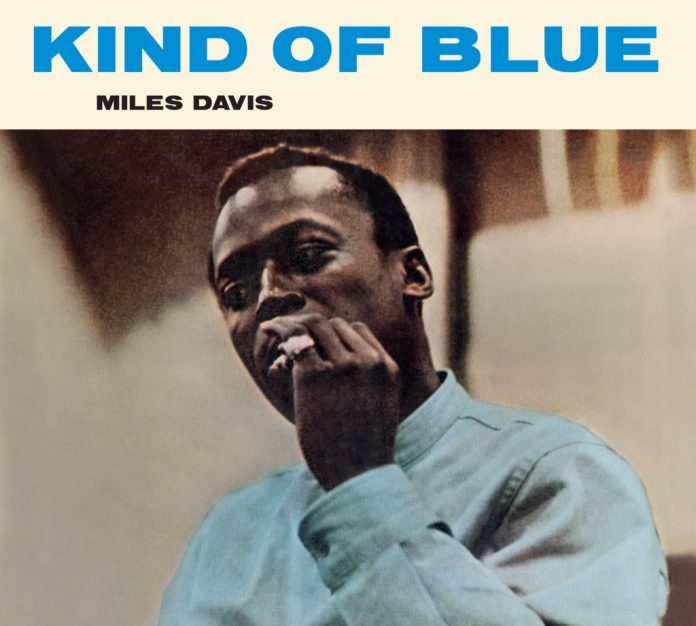 It’s 60 (sixty!) years since Kind Of Blue, the biggest-selling jazz record in history, came into being. Presumably, its mechanical copyright ran out 10 years ago, but it’s still selling. It was hailed as a masterpiece when it first appeared and no-one has ever seriously challenged that since. If you haven’t already got a copy, you should get this one – there are a few extra bits and pieces on it, too.

Right – that’s the review dealt with; now for a few random observations.

Kind Of Blue was the first album devoted to the type of jazz devised by Miles Davis and almost immediately labelled “modal”. This refers to the scales, or modes, on which the music is based. These are derived, not from mobile, chromatic chords, as in bebop, but static harmonies which change much more slowly. The result, for the listener, is a feeling of space and easeful contemplation. That, at any rate, is the effect here, and it provides the perfect setting for Miles’s delicate, luminous trumpet. The whole set of five pieces has a unique, enclosed, almost enchanted atmosphere. As a studio recording it works beautifully; it’s hard to imagine it in live performance.

The album arrived at what was probably the all-time peak of popularity for jazz, and international popularity at that, with a world-wide following not unlike that for European classical music. In fact, there’s more than a hint of European sensibility in Kind Of Blue itself. The very first piece, So What, opens with a piano introduction strongly reminiscent of Debussy. Like the albums that Miles was making with Gil Evans at the time, there was something universally acceptable about Kind Of Blue that caused it to float effortlessly over the invisible barrier separating jazz from other genres. I think, too, that there was something in the air. Enough time had passed since the end of World War II for a whole new generation to grow up, better educated, better informed, and, on the whole, better off. They seemed to be waiting for something, rather like the post-World War I generation of the early 1930s that fell for jazz itself, and notably Louis Armstrong.

Whatever the case, Kind Of Blue has a potency that seems unquenchable. I have given up noting the occasions on which clips from So What and All Blues fade in behind the action of television documentaries and commercials. There doesn’t seem to be any actual connection between the clips and the images, but I suppose the music must signify something like the Good Life or elegance, or just nice things.

And, finally, if you go back 60 years from 1959, back past bebop, the swing era and the 1920s, you arrive at 1899. which means that Kind Of Blue is exactly half-way between us and Buddy Bolden. Make of that what you will.

Fred Grand - 31 May 2021
Norwegian-American electronic musician and producer John Derek Bishop (aka Tortusa) operates in an exciting space where jazz, minimalist electronica and ambient musics are fused into a new and coherent...