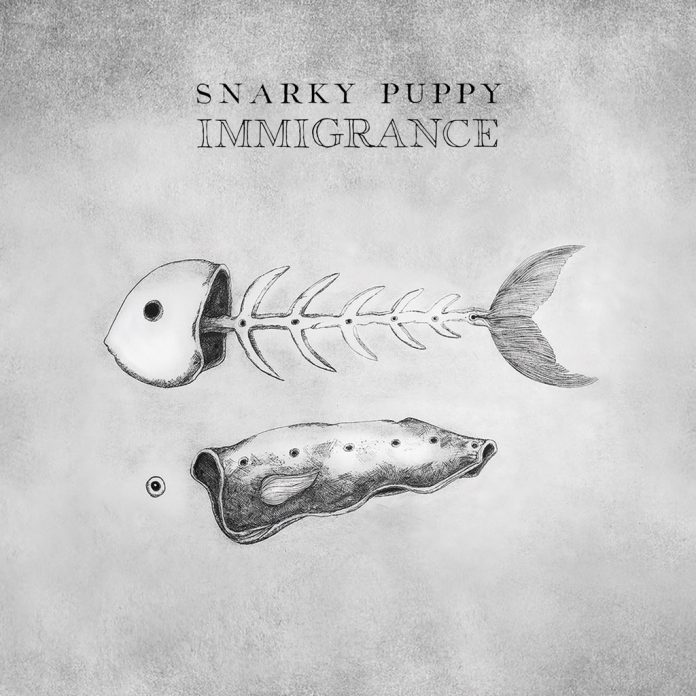 Snarky Puppy’s meteoric rise to international acclaim has been hard to miss. In 2014 they released We Like It Here, with tracks Lingus and What About Me? having subsequently reached millions of views on YouTube. The band already have three Grammy Awards to their name, the most recent one being for their 2016 album Culcha Vulcha, which won Best Contemporary Instrumental Album in 2017.

Their line-up is known for its vast size and musical diversity, and is referred to as The Fam, including around 40 different musicians. Their success so far has thrown several of their band members into the spotlight, such as pianists Corey Henry and Bill Lawrence, as well as bandleader Michael League.

For Immigrance, League has drawn on their international touring and experience of different musical cultures as influences, and this provides a fantastic range of styles across the eight songs. The opening track, Chonks, has a strong 80s funk vibe, with driven guitars and synths complimenting a soaring brass section. Bling Bling is a more contemporary piece, with a spacious arrangement that includes ethereal electronic sounds and complex, syncopated drumming, before a powerful crescendo. In contrast, Even Us features violin, oud and piano, creating a gentle but moving acoustic composition.

Every track features drummers Jamison Ross, Jason “JT” Thomas, and Larnell Lewis, who split the sections between each other. This can be seen in the psychedelic music video for the seventh track, Bad Kids To The Back, which was released in February. With a superbly tight groove, the variation in drumming throughout really enhances the piece.

Snarky Puppy have captured the imaginations of musicians globally, and their highly skilled and unique approach to composition and arrangement is going from strength to strength. Immigrance is an excellent album, further consolidating their status as the giants of contemporary jazz. They are currently on a world tour and will be performing at the Love Supreme Festival in East Sussex, 6 June, before returning to the UK in November.

Bruce Crowther - 31 January 2019
For a number of years, Silvano has been at the forefront of innovative jazz singing. Often in collaboration with husband Lovano, she performs from her New York City base,...