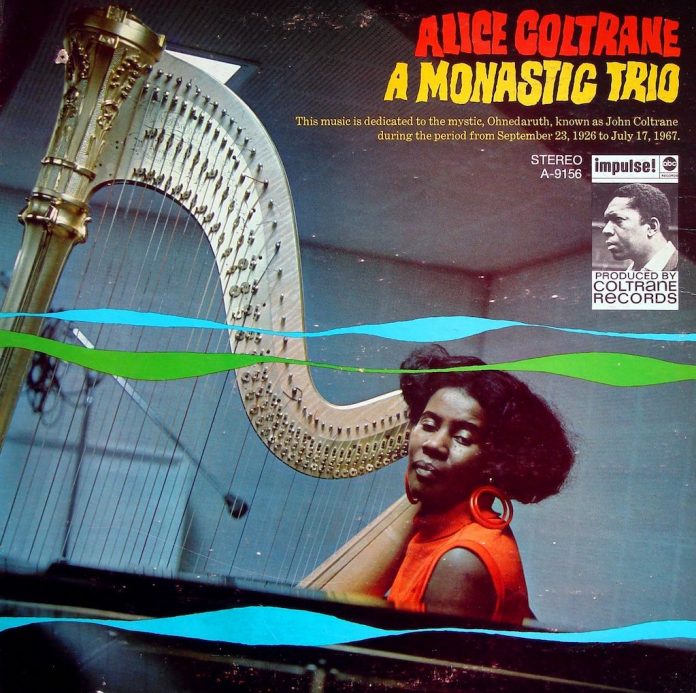 If, as the sleeve suggests, this album was intended as a musical epitaph to the late John Coltrane, it does him less than justice.

Side one contains much good jazz, with Alice Coltrane playing with enough emotional involvement to disguise the lack of variety in her work.

Ohnedaruth features Pharoah Sanders and here his bass clarinet sounds, at times, like Eric Dolphy and at others like latter-day Coltrane. While the bubbling rococo runs in the lower register have the sound and the slightly metronomic timing of the former, the grainy tonal quality in the upper register has more in common with Coltrane.

Gospel Trane is appropriately titled and is a piano trio in the old-fashioned sense. Ali, apart from a well constructed solo, plays the role of accompanist to the pianist. Garrison also performs creditably, although there are moments when Alice Coltrane’s strong chordal patterns duplicate the bass line.

I Want is a rather rambling track, rich in melodic content but with a tendency to become a little static. Mrs. Coltrane’s approach to it reminds me of the way in which Erroll Garner remodels a slow ballad, except that she is more modern in concept and lacks that brilliant player’s flair for note displacement.

Side two is best forgotten. The leader switches to the harp and the musical standard drops noticeably. Sky Boat and Oceanic Beloved sound like film sound-track selections and on the latter in particular, we are treated to the contrast of Alice Coltrane’s weak and merely decorative arpeggios rolling in against Ali’s stronger and more positive percussive breakwater. Weighed against the obvious merits of side one, is the over-preciousness of side two. Its three dispensable titles are small compliment to John Coltrane, although they do remind us, in some strange way, that he personally never resorted to shallow descriptive pieces in his entire life.
Barry McRae

Brian Morton - 24 March 2019
The present Mrs Morton wanted to know if this was the same Gorka off Strictly Come Dancing. Such is the yawning cultural chasm in our house. It isn’t, but...

Jazz Journal - 30 November 2019
There is no doubting the technical facility of vibraphonist Gary Burton. Where he falls down is in his musical outlook. By his own admission he is happier with the...