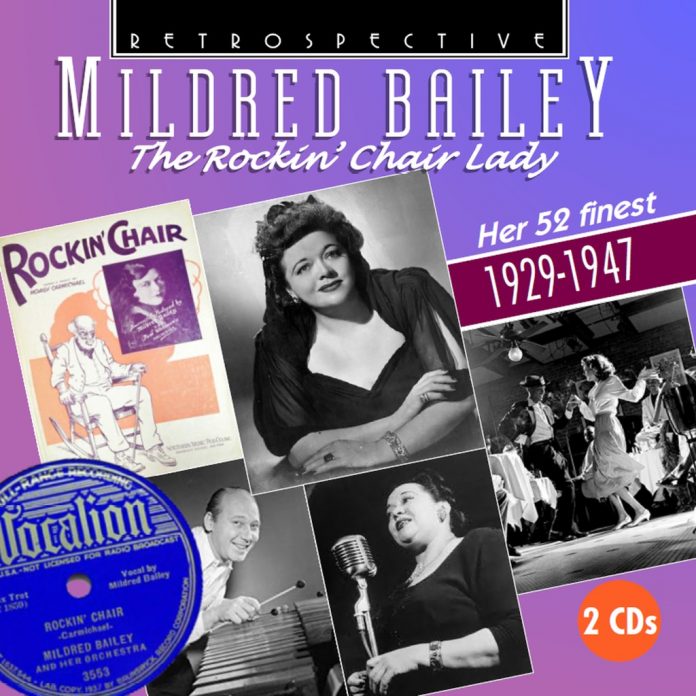 Née Mildred Rinker in 1907, Mildred Bailey had her first big break when she joined Paul Whiteman in 1929, at the behest of Whiteman vocalists Al Rinker (her brother) and lifelong admirer Bing Crosby. A number of hit recordings peaked with Rockin’ Chair in 1932. (However she was then saddled with the unflattering sobriquet for an already very large young woman, The Rockin’ Chair Lady).

She left Whiteman soon after together with Red Norvo, whom she married in 1933. (They became known as “Mr and Mrs Swing”). Now a big name in the burgeoning swing scene, Mildred recorded and broadcast with many of the top instrumentalists of the day, with and without Norvo, throughout the 30s. From 1936 to 1939 she was featured vocalist with Norvo’s orchestra. When their marriage broke up she continued to work with star names, notably Benny Goodman. With popular hits such as Weekend Of A Private Secretary (1938) she regularly outsold other female vocalists, Billie Holiday apart.

All but five of these 52 tracks span 1931-1939. The fine track from 1929 with Eddie Lang was her first recording. With faultless diction. her small but tuneful and crystal-clear voice handled lyrics adroitly (as in the difficult Smoke Dreams) and swung expressively, blending a suggestion of girlish naiveté with underlying chippier, worldly assurance.

Her phrasing  mannerisms included an upward swoop to hover over a key note with a pronounced but delicate vibrato. On some early recordings, e.g., Blues In My Heart, this could sound a little tremulous and sentimentalised. Her natural musicianship is never in question, however, with outstanding later treatments of classic ballads such as Thanks For The Memory, Lover Come Back To Me, I Let A Song Go Out Of My Heart and Don’t Take Your Love From Me ( written for her, and Mildred’s favourite song).

Her high commercial  status is confirmed by the stellar instrumental backing she enjoyed. There’s so much to enjoy here in brief but telling contributions from the likes of Hawkins (Old Pappy), Berigan, Hodges and Wilson (the excellent Alley Cats Quartet session  from 1935), Eldridge (Where Are You?) and many other jazz luminaries including Chu Berry, Mary Lou Williams, The Dorsey Brothers and Benny Goodman.

Despite all this success, her career stalled rather than soared in the 40s. With increasing health problems and now enormously overweight, she suffered mood swings which led to explosive displays of bad temper, making her difficult to work with, and doubtless a major factor in her declining fortunes. However she continued to work when she could. The final track here, from 1947, is a full remake of a number one hit with Whiteman back in 1932, the wryly appropriate All Of Me.

She died alone and penniless in 1951, aged just 44. Nowadays largely overlooked, she was, in John Hammond’s estimation, “one of the three or four greatest singers in jazz”. This very well-planned and well-produced compilation is a welcome and deserved testament to her achievements.

Playing time is generous, and full discographical details, with helpful notes are given.

Brian Payne - 29 May 2022
The album’s title comes from a 1961 science-fiction novel by Polish author Stanisław Lem in which an astronaut returns after a 127-year mission and finds life on Earth has...