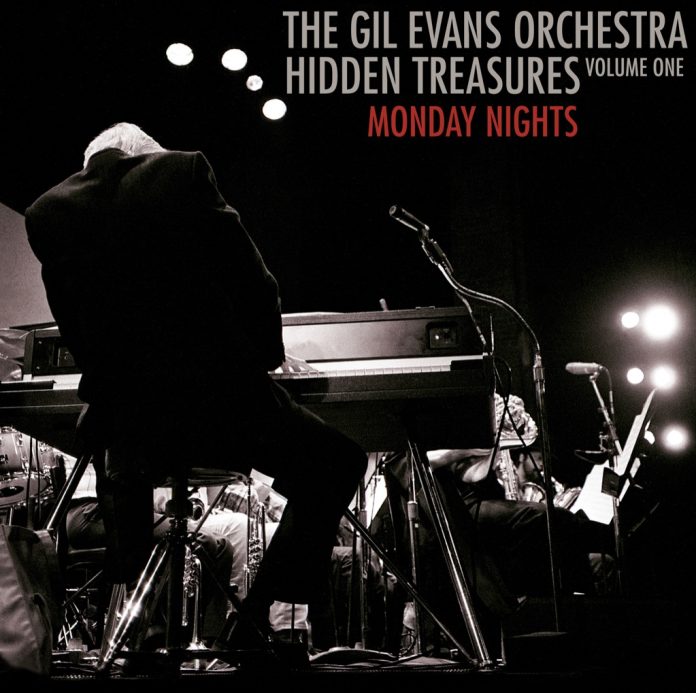 Hidden Treasures Monday Nights is the first studio recording of the Gil Evans Orchestra in over 40 years. It has been well worth the wait. As one of the most revered orchestrators and arrangers in jazz history, Evans played a seminal role in the development of cool jazz, modal jazz, free jazz and fusion. All of his these influences are strikingly present on this CD, which presents a contemporary incarnation of Evans’ distinctive music.

After a string of gigs which started in the late 70s, in 1983 The Gil Evans Orchestra started a run of Monday night sets at Sweet Basil in Greenwich Village. The gig continued until 1994 featuring among others George Adams, Hannibal Marvin Peterson and Howard Johnson.

Gil’s sons, trumpeter Miles Evans and his brother Noah are well and truly keeping the flame alive in this first in a trilogy of recordings, of which Monday Nights is the first. The project features compositions which the orchestra played live in the late 70s and early 80s.

The superb ensemble work shows this to be much more than a group of gifted soloists. The combined instrumentation generates the power of a full orchestra, no better demonstrated than on the opener, Subway. Some of the playing brings back happy memories of the best work of Groove Collective in the 90s.

There are many individual performances that are worthy of particular mention – David Mann’s brilliantly swirling alto solo on I Surrender, Matthew Garrison (son of Jimmy) and his space-age electric bass solo on LL Funk and his playing throughout, Alex Sipiagin’s soaring trumpet on Groove From The Louvre. Gil Goldstein, an Evans protégé, presents two contrasting piano solos on the Gil Evans-arranged Lunar Eclipse, shadowed by dreamy synthesiser, before giving way to the percussive colours of Mino Cinelu’s percussion and Kenwood Dennard’s driving drums.

Nic Jones - 20 May 2019
Cascade is both the most animated track on this album and the one where the feel of everything having been worked out in advance is slightest. As with the rest...