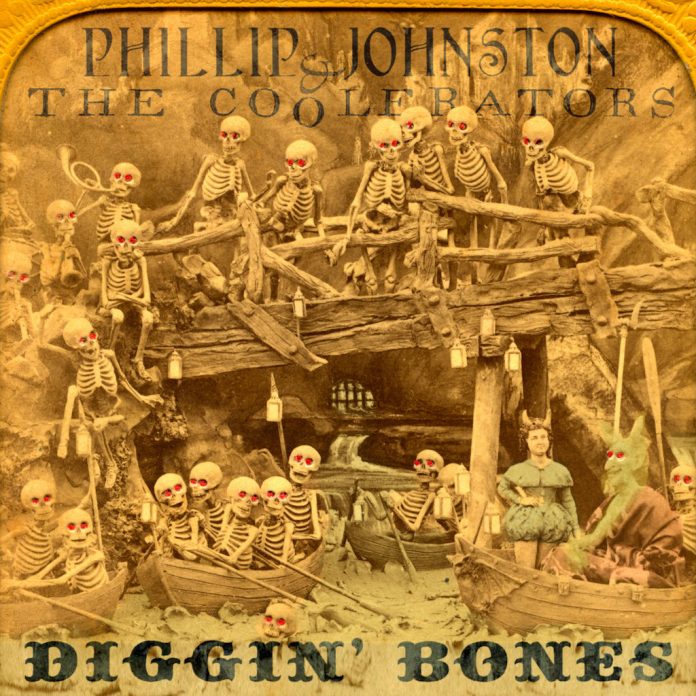 The saxophonist leader of the Microscopic Septet – that either means a great deal to you, or nothing – moved to Australia in 2005 and seems to have developed a whole new career as an expert on music in the silent movies. The Adventures of Prince Achmed was devised as a soundtrack for Lotte Reiniger’s  beautiful 1926 silhouette animation, which in turn is based on the One Thousand Nights and One Night, or Arabian Nights in British usage. Diggin’ the Bones is closer to what Johnston writes with collaborator Joel Forrester for the Micros, who continue as a going concern, despite their geographical shifts; but again, the concept seems to be early entertainment technologies, in this case 3D stereoview prints which allow the owner to create parlour “movies” and panoramas of saucy scenes, or in this case Hell.

It’s rather touching that Johnston should have personally signed each review copy. This doesn’t so much curry a favourable notice as serve to remind that his music now has its own immediately recognisable “signature” or autograph. Fast, looping melodies that sometimes recall Raymond Scott, sometimes Frank Zappa, often early country blues, but often delivered in layered portions and parts for which silhouette animation and stereoscope are more than viable metaphors.

The film soundtrack, which still exists as a live project, was originally conceived as an hour-long improvisation for winds, keyboards drums and pre-set samples. The track listing is simply for CD convenience. Diggin’ Bones is a more conventional group line-up, but with Alister Spence less familiarly on organ and Necks man Lloyd Swanton providing his own signature hypno-bass.

Suffice it to say that both are intensely beautiful, often poignantly amusing and utterly humane. If you aren’t familiar with Johnston’s work, it might be worth digging out Cuneiform’s Seven Men in Neckties/Surrealistic Swing and sample a back catalogue that goes back to 1980 (and once featured John Zorn as a member), putting out there what Johnston severally called a “brassless little big band” (Greening’s trombone on Prince Ahmed is a fairly rare breach of that definition) and “guitarless r’n’b”. His work since has deepened and grown in harmonic and expressive sophistication, but I sense these discs will be better appreciated by initiates than newcomers.