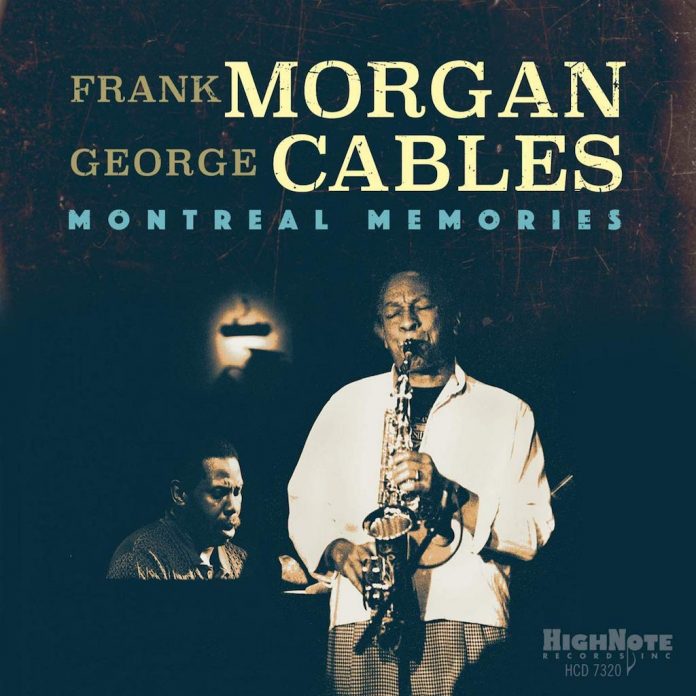 Saxophone and piano duos can be lazily “conversational”, one-off encounters for the smaller tents at a festival or old pals’ dates that don’t amount to much more than pipe and slippers. Morgan and Cables had known each other for a decade when this was recorded, the duo’s relationship already cemented by the enthusiastic support of crime writer Michael Connelly, who also made the moving documentary Sound of Redemption: The Frank Morgan Story. There’s nothing easy or pre-set about the playing here. Cables is a master of structure and Morgan’s songful delivery is as logical and Bird-feathered as his great model.

The son of Ink Spots guitarist Stanley Morgan, Frank grew up round the business, and was able to tap into both its wisdoms and its temptations. After the 22-year-old Minneapolis-born saxophonist made his West Coast debut, he sank into drug and drug-related problems that meant the prison house was to be his woodshed for some years. He wasn’t so long away from the exercise yard when he met Cables and began the long sequence of “comeback” albums that carried him through into the new millennium.

If you haven’t heard City Nights: Live at Jazz Standard and its companion Raising the Standard: Volume Two, also on High Note, you might not be aware of the Cables connection. This is from a decade and a half earlier, and without the later rhythm section of Curtis Lundy and  Billy Hart. They’re not so much not missed as not really necessary.

Frank, who paid homage to Bird in every bar, even while denying that he was a disciple, knows this material so well that he glides through it almost on muscle memory. A briskly soulful “Now’s the Time” establishes the basic language, with Cables supplying the spiderwork and gentle countermelodies. “All the Things You Are” and “A Night in Tunisia” are perhaps more originally reconceived, while “’Round Midnight”, always a dull tune even in expert hands, is the only cut that sounds pro forma.

“Confirmation”, by contrast, is an exhilarating blast, before the duo make more personal homages in Morgan’s “Blues for Rosalinda” and Cables’s “Helen’s Song” and “Lullaby”, After which there’s a virtuosic chase down the challenging line of “Nefertiti”, just to show that Morgan knows where the lineage leads, and “Billie’s Bounce”, just to show that he knows where it came from. A totally satisfying performance, at every level.

Discography
Now’s The Time; All the Things You Are; A Night in Tunisia; ‘Round Midnight; Confirmation; Blues for Rosalinda; Helen’s Song; Lullaby; Medley: Nefertiti/Billie’s Bounce (64.14)
Morgan (as); Cables (p). Montréal, 1989.
High Note HCD7320

Brian Morton - 13 February 2020
Not to be confused with the older "Captain" John Handy, the Texan was a gifted multi-instrumentalist who saw service with Mingus (Ah Um is included here as...

Steve Voce - 10 April 2019
Tommy Dorsey liked to have all the “improvised” solos in his numbers concur note-for-note with the originals on his records. One night in the summer of 1946,...

Jazz Journal - 30 August 2019
Perhaps the most exciting performance of the day was that of guitarist Keith Rowe and drummer Eddie Prevost. Music of appalling originality, their set was introduced with...

Dave Jones - 22 October 2019
This multi award-winning documentary film by Bruce Spiegel was eight years in the making, and features over 40 interviews, including some with those who were closest to...