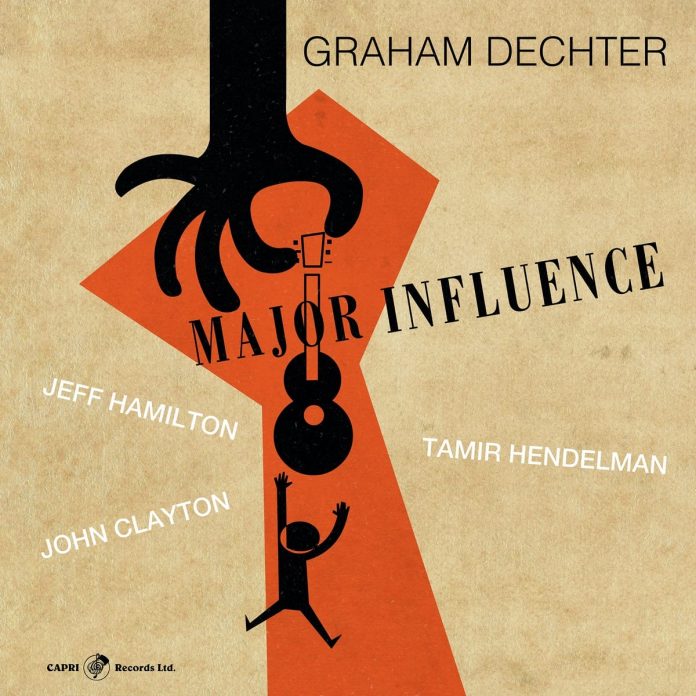 Guitarist Dechter made a big impression in 2009 when still in his teens. He made his debut as a leader then with a record titled Right On Time and was highly praised for his second, Takin’ It There. He was invited to join the Clayton-Hamilton Jazz Orchestra and you can hear how well he fitted with the trio from that unit on this release under his own name.

He wrote all the music here apart from the Leslie Bricusse and Anthony Newley ballad, Pure Imagination. The charts here are all blues or blues-based and Dechter proves himself a natural swinger and improviser in this format. Orange Coals is the first, a slow-burning blues which he digs into confidently with Hamilton and the trio backing him vigorously. Reference slows it down a little and there are some tasty contributions on bass from Clayton.

Hamilton is tasteful in support but still drives hard on every selection, even the slow pieces. The diet of blues is rested briefly for the ballad Pure Imagination, where Dechter moves into lyrical melodic mode. Hamilton takes a brisk, shuffling solo with brushes here and Hendelman makes an impact on piano.

Bent On Monk gives us another side of the guitarist where he plays some Monkish phrases and Thelonious type melodies but does not adopt the percussive angle; likewise the pianist in his refreshing solo. Dechter claims Wes Montgomery and Herb Ellis as major influences and you can hear the former in his approach, his warm long lines and his blues-based stylings. The last track here, Billy’s Dilemma, is pure hard bop, fast and furious and a good workout for guitarist and drummer.

It’s a good session all round and very much in the hard bop and blues tradition. Hamilton’s playing throughout is supportive and varied but the main interest will be hearing Dechter’s contemporary take on an old, well-tried format and watching him grow in the years to come.

Peter Gamble - 05 July 2019
All of the compositions on this release come from trumpeter Douglas, apart from Devotion and are mostly devoted to people he admires, including Mary Lou Williams, Dizzy Gillespie, Franco...