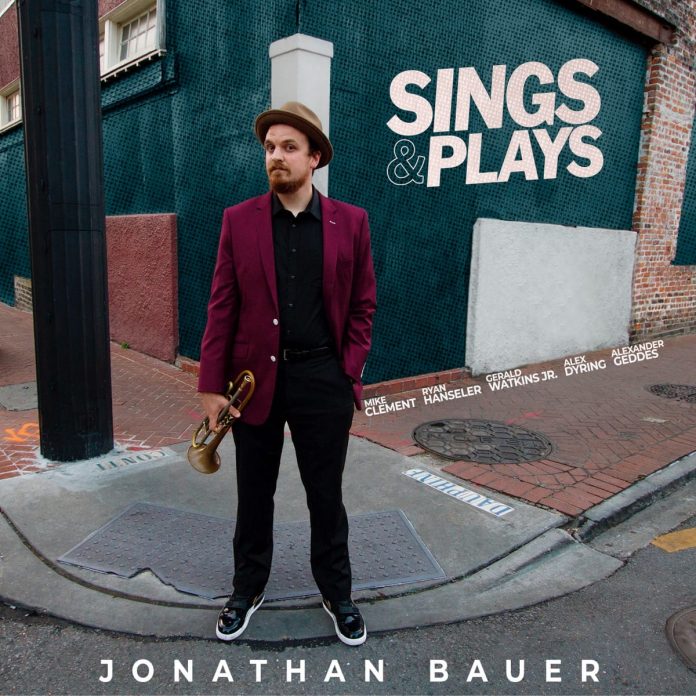 Canadian trumpeter and singer Jonathan Bauer is well known in New Orleans, where he is based, but less so outside of it. Here he is joined by fellow Crescent City musicians in a selection of familiar standards featuring the leader’s vocals.

According to the sleeve notes, he takes Chet Baker as an inspiration – the way his voice sounded like an extension of his horn. Although the link is there in the way his vocals flatten notes and in the sometimes suspect pitch, his style lacks the fragility and wistfulness of Baker – in comparison Bauer is more joyful, at times even jaunty, in his delivery.

However, the arrangements fit the tunes well, the brass are particularly effective in their unisons, and the soloing is first rate. This is seen to good effect on Days Of Wine And Roses, with its Blakey / Silver nuances, and on It Could Happen To You, which after some useful solos explodes into a lively cadence, unfortunately too brief and tantalising.

Bauer’s trumpet tends to be soft and warm toned, rather like a flugelhorn, which contrasts well with the forceful tenor of Alexander Geddes. There are useful solos from all, but I especially like Gerald Watkins’ effective use of tom toms on the drum intro and closing statement on Love Is Here To Stay, which has an interesting change of direction before and after the vocals and fine contributions from guitarist Mike Clement and pianist Ryan Hanseler.

Almost all the tracks are essentially standards set in “modern” jazz, the exception being Exactly Like You, with its more mainstream character, both in Bauer’s vocal delivery and in his more open and clearer trumpet sound. The Horace Silver composition Doodlin’ is purely instrumental, no vocals, the solos imaginatively executed and the ensemble section tightly blended.