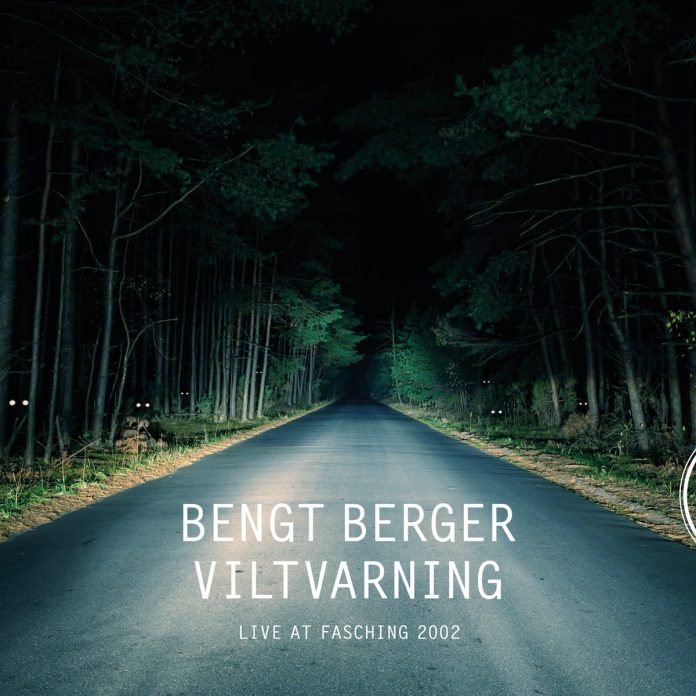 The title of this terrific, two-drummers-led session from Stockholm’s legendary Fasching club could be translated as “Warning: Wild Life”. Appropriately enough, the cover of the digital release depicts a road, lit only by car headlamps, cutting through a forest otherwise shrouded in darkness.

The music of this “wild-themed” evening – an evening which included a suitably prepared menu for the patrons at Fasching – begins with Berger’s tongue-in-cheek vocal hypnotising of the audience. And the entrance fee for the gig came with a money-back guarantee, if an elk had not at some point in the evening wandered into the club . . .

Recorded in 2002, the two sets furnished leader and producer Berger – who composed all the pieces – with almost two hours of music. At first he thought to edit things down to single CD length, but then decided to release all the music digitally, with only a few moments of talk and applause taken out.

Featuring pinpoint interwoven ensemble riffing and rubato colour as well as full-on solos from some of the strongest musicians on the Swedish scene at the time, Viltvarning is both plenty wild and plenty cultured – and hugely enjoyable.

If Berger’s literate affinity for seemingly time-transcending aspects of Indian music is evident in mood-rich drone pieces like the arco-fed Kanakangi, the blues-shot, rolling and swinging Magadaskar (where Öberg comes on strong) showcases another side entirely of this maverick’s many-sided muse. So too the reflective and keenly pitched Over The Hill – for me, the outstanding piece here, fired by Knutsson’s searing alto – and the fat and full fun of Funk You. Elsewhere, things can move quickly from an atemporal, Ayler-like intensity to ostinato-sprung riffing and folkish melody, with some characterful vocalising at various points from Lina Nyberg and a slew of further fine solos all round.

The digital sleeve gives detailed information on all such activity – which is just as well, so richly and diversely voiced is this shape-shifting journey into the wild. Crack open a beer or two, perhaps with a chaser on the side, and prepare to fly …

Michael Tucker - 17 April 2020
This is the debut recording by Danish composer and drummer Hyllested – and what a debut it is. Darling River comes over as a deeply meditative seven-piece suite, mixing...