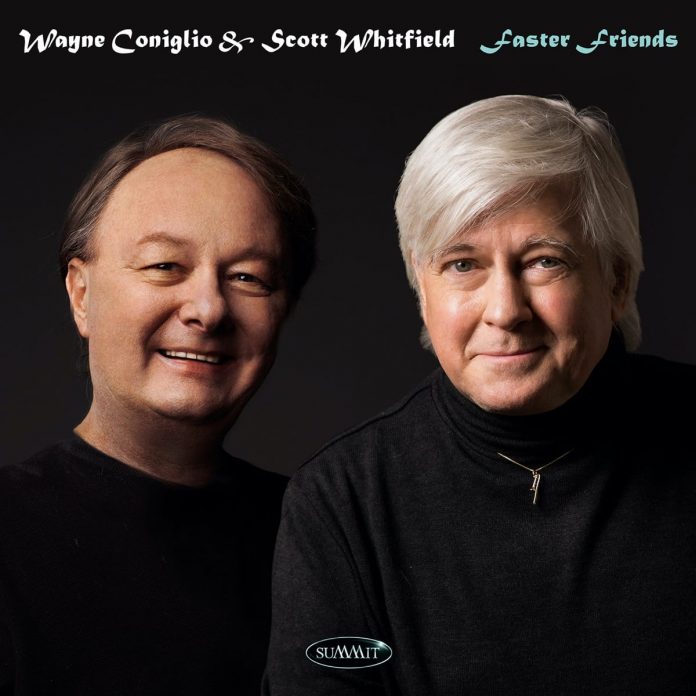 The ’bones are back in town. Faster Friends, product of trombone pros Wayne Coniglio and Scott Whitfield, is the follow-up to 2014’s Fast Friends and ups the ante in cooperation with the excellent pianist Ken Keyner. That’s, following the Hollywood example, nothing short of a logical course of events. After all, Mad Max 2, Aliens 2, Terminator 2 and, last but not least, Emmanuelle 2, all were superior to otherwise excellent prequels.

Faster Friends presents the kind of unbeatable jazz that mainstreamers will admire as a feast of recognition. Hardly innovative and focusing on familiar standards and changes, it seals the bond between two class acts on trombone. While both are influenced largely by modern ’bone giants, Coniglio veers towards the big tart sound of Slide Hampton and Wayne Henderson, while Whitfield’s punchy style reminds of J.J. Johnson and Frank Rosolino – diehard collectors will notice the sleeve design reference to a particular Rosolino record.

Though familiar, the repertoire is surprisingly diverse. Tight bop ensembles mark Dexter Gordon’s Fried Bananas. A sleazy bounce defines the good old swing of warhorse Girl Talk. On a more progressive note, Coniglio and Whitfield sugarcoat Bobby Hutcherson’s Little B’s Poem with a fondant texture and, probed by Kevin Gianino’s polyrhythm, heighten tension with Steve Grossman’s 415 Central Park West. To boot, their sincere interpretation of the obscure Free And Easy, theme song of a Buster Keaton flick, will put the mainstreamers on the edge of their rocking chair.

It’s a good thing that variety is continued with Coniglio’s original compositions, which compensate for the lack of punch that trumpet or tenor sax commonly provide. The ballad You’re My Dream Come True is a fine bass trombone feature for Coniglio, who endearingly refers to Lil’ Darlin’.

Step Checkitude, a neat extension of a line from John Coltrane’s Giant Steps, particularly stands out. Its progression is a perfect foil for Coniglio’s and Whitfield’s thoughtful improvisations, while pianist Ken Keyner performs one of his most impressive and urgent solos, guising as a postmodern Tommy Flanagan. Like the late Flanagan, the all-round Coniglio, Whitfield and Keyner master their area of competence with grace and ease.

Fred Grand - 24 March 2021
I'm an admirer of both Foran and Schumacher, so this release was never likely to escape my radar. The two are old friends, and the Luxembourger Schumacher’s quartet once...

Carole Simpson: Singin’ And Swingin’ / Connie Haines: A Tribute To...