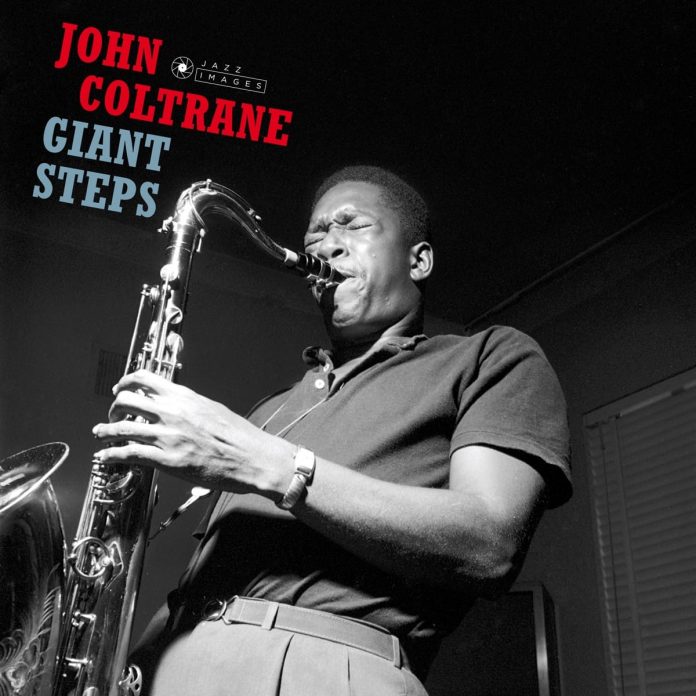 Coltrane’s masterpiece appears once more, this time as a limited-edition gatefold LP released by record label Jazz Images. Jazz Images is based on the work of famous jazz photographers such as Jean Pierre Leloir and William Claxton, offering books as well as albums with new covers and sleeves.

This edition of Giant Steps presents photographs taken by Francis Wolff. As with so many current reissues, bonus tracks are added, although rather than “bonus” a more accurate but less catchy phrase might be “tracks previously released on other records”. It must be said, however, that the extra tracks on Jazz Image’s Giant Steps LP are well justified.

The first is Some Other Blues, added on to the end of side A, and the second is Fifth House, becoming the final track on side B, both first released on Coltrane Jazz in 1961. Both are taken from the same session in which Naima was recorded, featuring Wynton Kelly, Paul Chambers and Jimmy Cobb. Some Other Blues is an uptempo piece, stylistically quite distinct from the preceding tracks. Fifth House, on the other hand, is much closer to the rest of Giant Steps, with a twisting melody and passages of blistering improvisation.

While my general view of bonus tracks is that personally I prefer hearing the album as was originally intended, these certainly contribute due to their recording date and lineup of musicians. The rest of the album doesn’t need exposition here, and is of course an essential jazz recording; while a new cover and two extra tracks may not be particularly exciting, it is still an incredible listen.

Fred Grand - 28 March 2019
At just 31 the young Norwegian saxophonist and bandleader Harald Lassen is barely old enough to have encountered the first great flourishing of Scandinavian free jazz, even by osmosis....