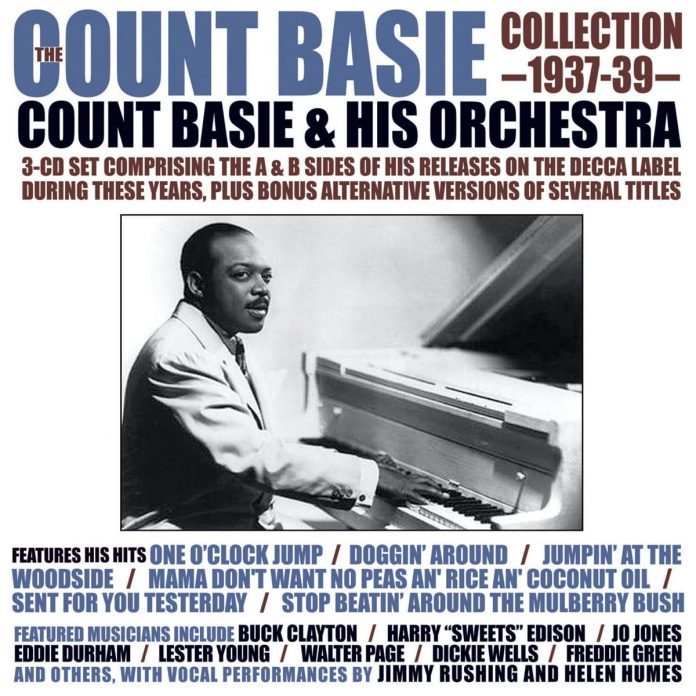 Acrobat Records have produced a three-CD box of all Basie’s output for the Decca label. They have chosen to issue the titles in order of first release rather than strictly chronologically. The A and B sides of all issues are here and where alternate takes were recorded, these have been included. Together with a 27-page book giving discographical information and exhaustive track-by-track notes on the sessions, this is a useful and thorough document of early Basie.

From the January 1937 session to the final rhythm-section only track, Red Wagon, this music demonstrates that this orchestra was the ultimate swing machine. On the early pieces, featuring somebody called Claude Williamson on guitar, the Basie sound and style is already fully formed. By track five, in March 1937, Freddie Green is installed and there he would remain for the rest of the Basie orchestra’s existence. It really all starts with that magical rhythm section – Walter Page on bass, Green on guitar, Jo Jones on drums and Basie calmly putting out his spare, frugal but so effective lines.

On a good proportion of these tracks, you will hear the light-as-air sound of Lester Young’s tenor sax floating out from the ensemble. Occasionally he will get into an involved, complex solo but not often. Most selections just have a freewheeling, light tenor sound that seems to be built into the orchestra. Trumpet solos are taken care of by the likes of Buck Clayton, Harry Edison and Shad Collins and you would have been hard put to find anybody else as good as them.

The blues is all over these selections and well-known Basie tracks are also prominent. It is interesting to note that Jumpin’ At The Woodside came out originally as the B side of Dark Rapture, which featured the first ever appearance of Helen Humes, as vocalist with the band. Her sweet, flowing voice sounds now like an early inspiration for Blossom Dearie. Somebody thought highly of her to put her side out as the leading track, but it was Woodside that became the hit.

Jimmy Rushing is heard blues shouting his way through many pieces and the combination of his craggy voice, Lester’s sublime tenor solos and the precision of the horns makes for some magical early jazz. You Can Depend On Me is a track by a Basie sextet which has swinging Young, Collins and Basie solos. Young and the rhythm section are laid back, soft focus and Collins gives contrast with his edgy, tart trumpet solo. It is also instructive to listen to the four-piece rhythm section on several selections, mainly blues but all indicating how easy it must have been for Basie to improvise in his lean, spare style over that throbbing section. Magic.

Nic Jones - 02 August 2019
The bigger this Fresh Sound series of The Best Voices Time Forgot gets, the more it positively evokes an era which seems long passed. That’s not to suggest female vocalists...