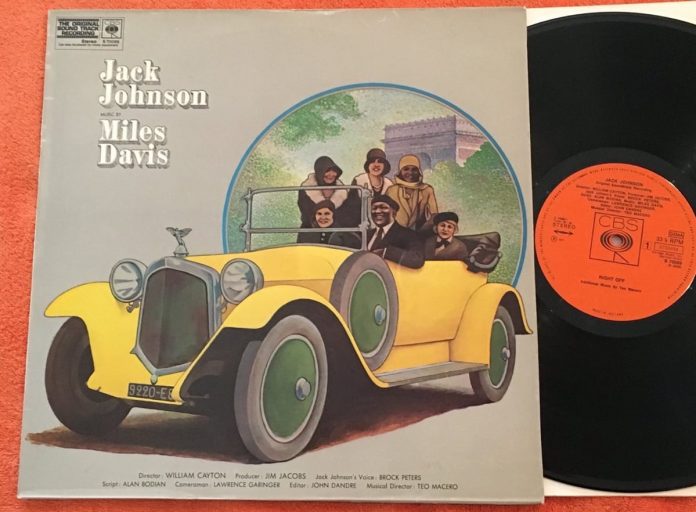 There are no details on the sleeve of this album, and the personnel above is a com­pound of near certainty, other people’s guesses, and what my own ears tell me. Re­liable sources claim that the organ’s played by Herbie Hancock, but the keyboard work here bears no relationship to Hancock’s normal style on piano or electric piano. Similarly, if it’s McLaughlin on guitar, I’ve never heard him sounding even remotely like this before, al­though I’m told that his work on his album with Larry Coryell (which I haven’t heard) is freakier and tougher than usual, and might fit in with what he sounds like on ‘Jack John­son’. I’m convinced that the trumpet solos are contributed by a bloke named Miles Davis, unless of course the whole thing’s a massive piss-take and it’s really a Nat Adderley LP.

The music, whoever plays it, is wonderful; I’m tempted to wax dogmatic and call it the best of Miles’ ‘rock’ records, but what I prob­ably mean is that I like it best. There’s a hard­-hitting urgency about it which puts it in a completely different class from the warmth and charm of ‘In A Silent Way’ or the some­times fragmentary, nervous stop-and-start quality of some parts of ‘Bitches Brew’. Those who try to kid you that there’s a basic mono­tony and a built-in death-blow to development in this kind of music just aren’t listening, you know.

Right Off features a long and magnificent solo by the guitarist over a compulsive (corny old word to use, but it’s true) rock rhythm. Henderson is the busiest of all the bass-guitarists that Miles has used, and he man­ages to keep the beat boiling and insert a few surprises of his own. Cobham’s drumming is incredibly crisp, extremely groovy and very swinging. The guitar solo is fascinating; played over what is basically a one-chord composition, it’s an exciting (yet very con­trolled) display of the resources available to an electric guitarist. McLaughlin (?) makes sounds in fact like a subdued Jimi Hendrix in quite a few places.

At least one devoted Miles worshipper has told me that he finds the trumpeter’s work on this album confusing and confused, with one set of notes completely unrelated to the next; well, Miles’ playing is certainly free in that he spreads himself out, and uses space and silence a lot, and isn’t tied down by bar-lines and chorus-endings, but his work is always related to the beat and the tonality, and I find these solos to be perfectly coherent. His tone (as Barry McRae astutely pointed out in his review of the ‘Fillmore’ LP last March) hasn’t changed at all – it’s as beautiful as ever; his manner of execution, on the other hand, in this his ‘hottest’ period (as I rather less astutely put it in my review of ‘Bitches Brew’ last September) is attack, attack, attack all the way.

As Miles ends his solo on Right Off, the beat fades and gives way to an eerie interlude featuring muted Miles over some electronic hum; after a few atmospheric minutes, the beat comes swirling back from the depths carrying the beginnings of Grossman’s ex­cellent soprano solo with it; the effect is quite fabulous, and retains its uplift no matter how many times you play the record.

I must be brief about the second side, which contains more brilliant music, including a bizarre splice from ‘In A Silent Way’ which I still haven’t got used to. I must restrict myself to comments on what’s there rather than what I would have liked to hear, but I must admit to finding the jerky, tonally ugly organ passages superfluous; in any case, there isn’t much of it. The climax of the album is a passage of muted trumpet over a Gil Evans-like background, prefacing a speech by Brock Peters, who’s the voice of the boxer in the documentary film for which this is the sound­track music: ‘I’m Jack Johnson, heavyweight champion of the world; I’m black – they never let me forget it. I’m black all right; I’ll never let them forget it.’ And you shouldn’t forget this album either – please buy it.

Barry Witherden - 04 March 2021
If you like this sort of thing (which I do) you’ll love this. Confront Recordings (M. Wastell prop.) celebrates its 25th anniversary this year and continues to maintain the...