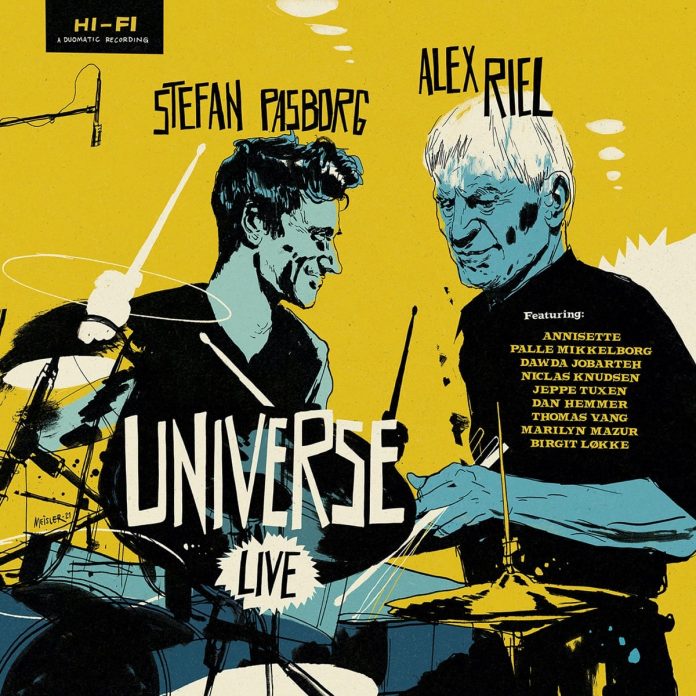 Riel (born 1940) has long acquired living legend status, both in his native Denmark and abroad. His CV includes work with Palle Mikkelborg, Bill Evans, Kenny Drew, Dexter Gordon, Ben Webster, Bob Brookmeyer, Thad Jones, NHØP and Don Cherry. Born in 1974 the excellent Pasborg is Riel’s godson and has long been one of the leading “happening” drummers on the Danish scene. Part of his current activity is with pianist Carsten Dahl’s Trinity, whose recent Mirrors Within I gave four and a half stars in March last.

Dahl contributes an appreciative and insightful sleeve essay to this cracking selection from the Universe band which Riel and Pasborg have been running for quite some time. Stretching back over 10 years, and recorded at a variety of noted venues including Copenhagen’s Jazzhus Montmartre and Skuespilhuset at the capital’s Royal Danish Theatre, the performances feature a diversity of personnel yet flow seamlessly as from a single concert.

To put it it simply, the music is a nothing less than a pure blast of life-enhancing joy. As Dahl says: “All in all, this exceptional production is exempt from any smartness for the sake of self-satisfaction, narrow-minded conceptual genre favoritism, or reductive and overly-obvious convention. The space that’s created here is done so by great personalities with huge, unselfish hearts.”

The space that Dahl talks about includes some strikingly meditative and soulful moments. Sample Mikkelborg’s rubato Intro, the Cherry-touched Bless You, the brief Ultimate Tears, featuring Vang’s spacious electric bass, and Smile, the Chaplin piece which Mikkelborg recorded on his early 1990s Anything But Grey and which receives a fine reading here from him and blues-fired vocalist Annisette.

But there is also many a full-on rocking groove, epitomised by Adonis, Long Before I Was Born, with its Cream–like riff and juicy vocal from Annisette, and Byen Vågner. Hear also the kicking and burning duet from Mikkelborg and Riel that is P. A. Duo and the exhilarating workout from Riel and Pasborg on Drumheads. Both tracks muster the sort of crisp and cascading energy that could raise the dead.

There’s plenty of lively, diversely projected guitar from Knudsen (sample Fela, Endangered Beat and Byen Vågner) plus much post-Booker T action from the Hammond B3, chiefly from Tuxen but with Hemmer helping stir up a seven-minute take on Mingus’s gospel-fed classic Better Git It In Your Soul (I’m unsure whether the “Hit” in the title given here is a piece of droll hipness or simply a misprint).

What “world music” colouring and drive there is makes unforced musical and poetic sense: sample the West African spice brought to Better Git It, where Jobarteh’s kora shines, or Løkke’s atmospheric santur and flute on Bless You, which also features Mazur on percussion in what is her only appearance here. The historical touches (shades of Krupa!) in the double-drum feature which is Drumheads are equally welcome. Hugely enjoyable music, this, delivered with great sound throughout.

Elliot Marlow-Stevens - 24 July 2020
Having been a professional drummer since the 70s, Jacek Kochan has worked with a number other jazz musicians through his career such as Oliver Jones,...