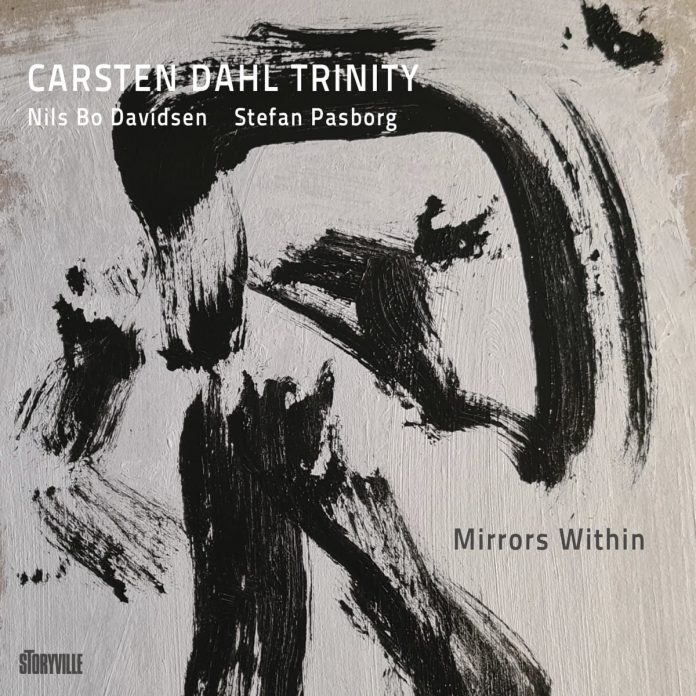 I’ve enjoyed the free-flowing, sometimes Jarrett-like work of the Danish pianist Dahl (born 1967) live in various groups, as well as solo. Much of his best work has been in trio format: Short Fairy Tales, Space Is The Place and Under The Rainbow, all cut with Arild Andersen (b) and Jon Christensen (d), exemplify Dahl’s capacity for quicksilver rhythmic interaction, while The Sign and Moon Water (with Andersen and drummer Patrice Heral) evince a more spaciously rendered, lyrical, even painterly, approach.

Both sides of Dahl’s pianism are in plentiful evidence here, in a release which finds him in the company of his excellent long-time Danish collaborators Davidsen (pizzicato throughout) and Pasborg. With the exception of Falling Down and How I Hear Beauty, which build on a few chords which the press release tells us Dahl “scratched down” on a piece of paper in the studio, the music was improvised spontaneously in a continuous sequence of first takes. For all such spontaneity, the session comes across as an integrated and fully resolved suite.

Featuring a monochrome cover brush drawing by Dahl (an accomplished painter of diverse Expressionist hue) Mirrors Within foregrounds equally a vibrant range of urgent, simultaneously dense and lucid rhythmic interplay (Old Rag, A Minor Disgrace, Everything Never Happens To Us) and lyrical impulse (Mysterious Room, How I Hear Beautiful and the opening The Prayer – which, like the strongly swinging Palilalia and the equally finger-clicking Turning Left, should appeal greatly to Jarrett enthusiasts).

Dahl has made no secret of the fact that he has experienced acute anxiety and depression in his life – as some of the titles here, such as Coma and Falling Down Down, might suggest. But Dahl has long drawn upon the potentially transformative power of art and the aptly titled Mirrors Within is a resonant example of the affirmative power of the human spirit at its improvised and collaborative best.

Brian Payne - 29 March 2019
All 11 originals on this album are composed by Canadian tenor saxophonist Griffith. The music is contemporary jazz with post-bop and straightahead leanings and occupies that rare terrain between...