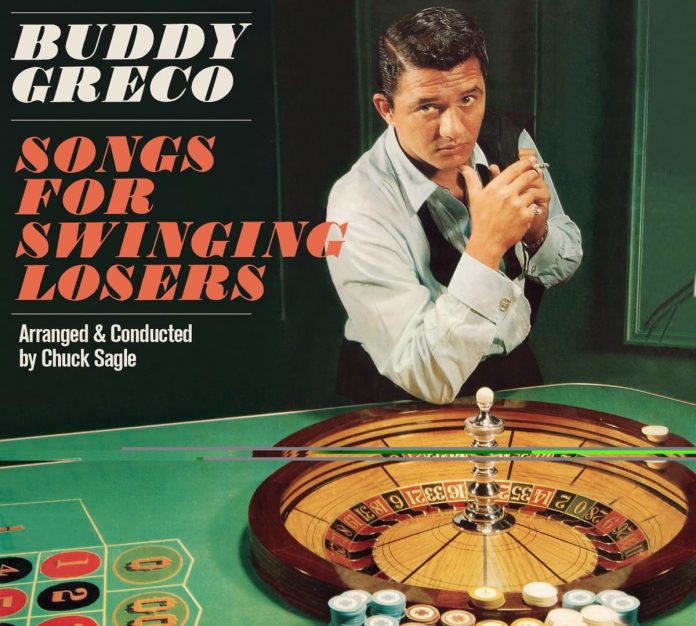 Buddy Greco was a fine singer, with great delivery and phrasing, but was popularly known as an entertainer. However there’s no denying his jazz pedigree. His output on his albums could be described, using an old expression, as something of a curate’s egg – good in parts, and there’s something about Songs For Swingin’ Losers that doesn’t show him at his best. The material is fine, but in the main it appears lacklustre. Of course it doesn’t help that the title alludes to Sinatra’s classic Songs For Swingin’ Lovers, recorded a few years earlier and with which, unfairly, comparison is inevitable.

The arrangements by Chuck Sagle are well orchestrated, but the strings don’t do it any favours and often seem unnecessary, especially on Ellington’s I Got It Bad. The numbers which have a greater jazz feel are those with more contribution from the brass and horns: A Swingin’ Loser, By Myself, and Don’t Worry ’Bout Me. In my opinion the standout track is You Don’t Know What Love Is, for the vocals and the orchestral accompaniment.

However, Greco was also a pretty useful pianist, going back to his teenage years, when Benny Goodman hired him – and, with Wardell Gray, was in Goodman’s short-lived bebop group. Tracks 13-23 give a taste of his proficiency at the keys, a live session from 1959, previously issued as My Buddy. It is also a better indication of where his strengths lay – as a first-rate performer in the intimate surroundings of a club, before a live audience.

Admittedly it’s a bit of an anachronism, especially with the “hip” lounge-bar language of the 50s, but I find this curiously endearing. His piano skills are featured on I Laughed At Love, How About You and Something’s Gotta Give, and there’s an uptempo, Latin-tinged version of Irving Berlin’s Cheek To Cheek. No live performance would be complete without his signature tune Lady Is A Tramp and the trio romp through this, Greco embellishing it with (then) contemporary references.

This collection is completed with a few extra tracks including Around The World from I Like It Swinging (1961), with Al Cohn’s band, This Could Be The Start Of Something (from Buddy’s Back In Town) and Roses Of Picardy (from Let’s Love). Desafinado is from his collaboration with Dave Grusin, Sings For Intimate Moments, with an appropriately Getzian tenor, although the heavenly choir does little for it.

For those who like torch songs, Songs For Swinging Losers will be of interest, but Live is a better example of his regular club performance.

Discography
[Songs For Swingin’ Losers] (1) A Swinging Loser; Something I Dreamed Last Night; The Masquerade Is Over; I’m Lost; These Foolish Things; Blame It On My Youth; By Myself; That Old Feeling; Don’t Worry ’Bout Me; You Don’t Know What Love Is; I Miss You So; I Got It Bad (And That Ain’t Good); [Buddy Greco Live] (2) Like Young; Only Love Me; Misty; That’s What I Thought You Said; Just In Time; I Laughed At Love; The Lady Is A Tramp; How About You?; The More I See You; Something’s Gotta Give; Cheek To Cheek; [bonus tracks] (3) Around The World; This Could Be The Start Of Something; Roses Of Picardy; The Most Beautiful Girl In The World; Desafinado (78.02)
Buddy Greco (v) with (1) Chuck Sagle Orchestra, NY, 1961. (2) Buddy Greco Trio Live at Le Bistro, Chicago, 15 October, 1959; (3) trio and orchestras, 1960-63.
Essential Jazz Classics 11435

Nigel Jarrett - 20 August 2019
As lost decades go, the 1970s were a cringing vestige of the 1960s, remembered for more inventive but less commercial developments in popular music. Pop became rock, a stretchable...