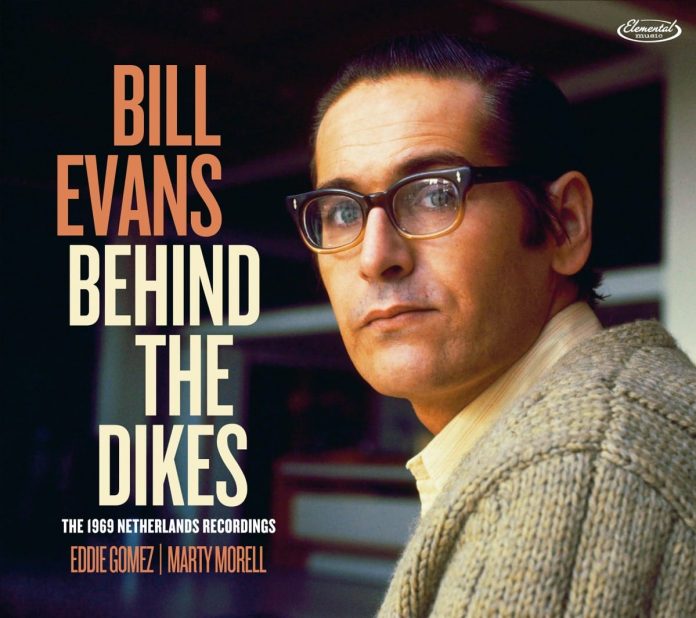 It was 1965 when Bill Evans first performed in Holland and he returned frequently to play until his death in 1980. His engagements there facilitated by the big jazz budgets of the Dutch broadcasting authorities at the time.

From the original Dutch radio master tapes, this excellent double CD presents three studio recordings that Evans and his longstanding trio – Eddie Gomez on bass and Marty Morell on drums – made in 1969. We hear them playing 14 numbers for a small invited audience in Hilversum. The playlist includes Evans standards such as Waltz For Debbie and Turn Out The Stars plus his only known recording of Ellington’s I Let A Song Go Out Of My Heart.

Then we have front-row seats for six numbers performed by the trio at a concert organised by the European Broadcasting Union in Amsterdam. Lastly we have Granados and Pavane – two classical adaptations recorded by the trio at another studio in Hilversum and backed by the mighty 50-piece Metropole Orkest.

The complete Hilversum concert and the Metropole session are previously unreleased. The Amsterdam concert has been available on a bootleg recording but with much inferior sound quality.

During a patch when Evans had seemingly kicked heroin and entered a period of personal stability, these recordings capture his lyrical and expressive pianism at its finest. The sound quality on both CDs is superb although the mix on tracks recorded at the first Hilversum concert is slightly unbalanced towards Morell’s ride cymbal which can detract from the piano at times.

The smart-looking digipak comes with an informative 32-page booklet, 12 hitherto unseen photos, interesting interviews with Eddie Gomez and Marty Morell and reflections on the recordings from pianist Vijay Iyer.

John White - 23 November 2019
These much reissued (often as bootlegs) radio broadcasts are prized by Parkerites, despite (or possibly because of) their fairly dreadful reproduction. Announcers Symphony Sid and Bob Garrity also add...