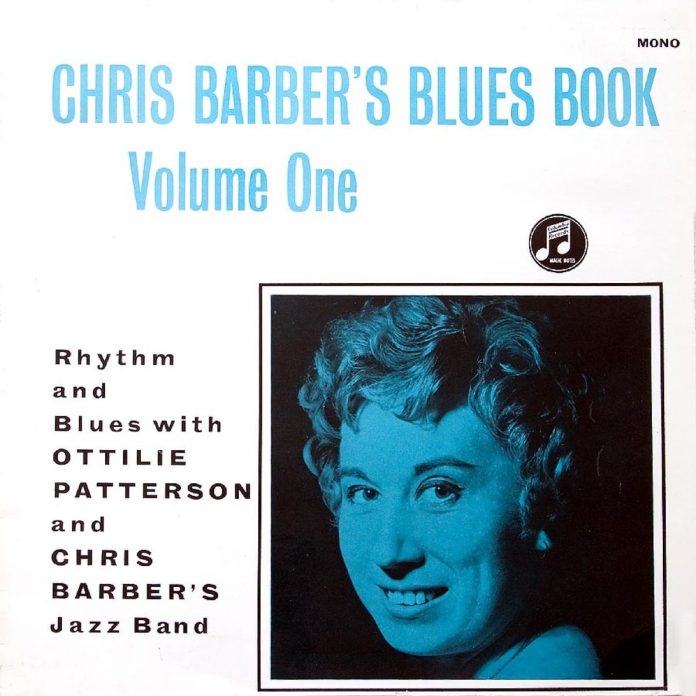 Several of our popular jazzmen have lately shown an interest in rhythm-and-blues. This is a welcome sign, and not without significance. For R&B, broadly speaking, has in recent years followed New Orleans and New Orleans-derived jazz (swing) as the poular music of the American Negro.

At the same time, outside America, and particularly in Germany, Denmark, Holland, Britain and Australia, “trad” jazz, based on the music of New Orleans, has assumed a similar social function to that of R&B in the U.S. There seems little reason why the two forms, which have so much in common, should not be fused to broaden the canvas of the local product.

A definite and quite successful move in this direction is Chris Barber’s ”Blues Book”, though the album might have been more correctly titled “Mrs. Bar­ber’s Blues Book”. For this is Ottilie’s record, and she makes the best of it by singing superbly throughout. Her style – and it is truly that now – is a most happy compound of the best influences, including Bessie Smith, Muddy Waters, Rosetta Tharpe, and Ruth Brown. She has taken these Negro styles, merged them, smoothed them out a little to suit her own circumstances, and the result is a personal, profound and quite valid manner of singing wherein the basic de­vices of Negro music are used as pegs on which to hang emotions common to us all.

The choice of material shows that Ottilie’s is a sensible approach to the blues (there are songs made famous by Bessie, Memphis Minnie and Ruth Brown), and it is good to see a couple of her own compositions included. One of these (“Bad Spell”) is the best track on the record and rates with Sandy Brown’s “Nothing Blues” and Ken Colyer’s “Goin’ Home” as my favourite blues performance by a British artist.

In support, the band crack down with Doggett-like intensity – New Orleans en­sembles, sizzling blues riffs, and a pound­ing R&B beat, triplets an’ all. And it works. Halcox’s tone is as hot as any Texas tenor player’s and his work on “Back Water” can only be described as exquisite. Chris, too, plays extremely well throughout – I like particularly his easy, thoughtfully constructed solo on “Blues Before Sunrise” – and he and the rest of the front-line are given fair en­couragement by a rhythm section which sounds quite practised in its new role.

Traditional jazz needs records like this – records which couple an imaginative and sensitive approach with a thorough knowledge of all forms of jazz. The music is established now, but most of its purveyors operate on a needlessly limited front. Revolution is not required, but development is. Chris Barber seems to be one of the few local jazzmen to realise this.

Bruce Crowther - 21 July 2019
Judy Wexler has recorded too few albums, but those that she has made are uniformly excellent. They are also striking for the song selection as she rarely makes obvious...